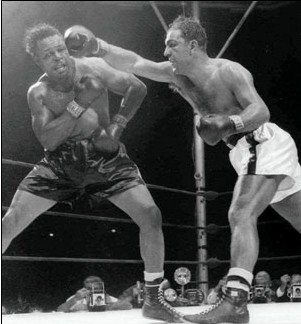 
Steve Allen was a pioneer of early television. He was the first host of the Tonight Show, leaving in 1957 to concentrate on his primetime variety show. Allen was one of the best-known television personalities of the 1950s and 1960s, and his "man in the street" skits gave rise to many comedians, including Don Knotts. Allen was also a prolific songwriter and jazz musician, and wrote many books as well. Item 132 is his 1992 autobiography Hi-Ho, Steverino! It is signed by Allen and his wife, actress Jayne Meadows. $50.

Item 2 is a screenplay for Butterfield 8 from 1959. It is a signed shooting script of Elizabeth Taylor: "Love you all, Elizabeth Taylor." Taylor would win an Academy Award for Best Actress for this film in 1960. $3,500.

Item 18 is a 1967 application for a California matchmaker license signed by Archie Moore. Moore was one of the greatest and most durable of boxers. His career began in 1938, and did not end until almost 200 victories later in 1963, just short of 50 years of age. It was then that he turned to matchmaking. Moore finally became a champion at age 39 when he won the light-heavyweight title. He was Rocky Marciano's opponent in the latter's last fight, which he lost despite knocking the heavyweight champion to the canvas. He also fought upcoming boxer Cassius Clay, now Muhammad Ali, and was defeated, but he was 48 by the time of that fight. $500.