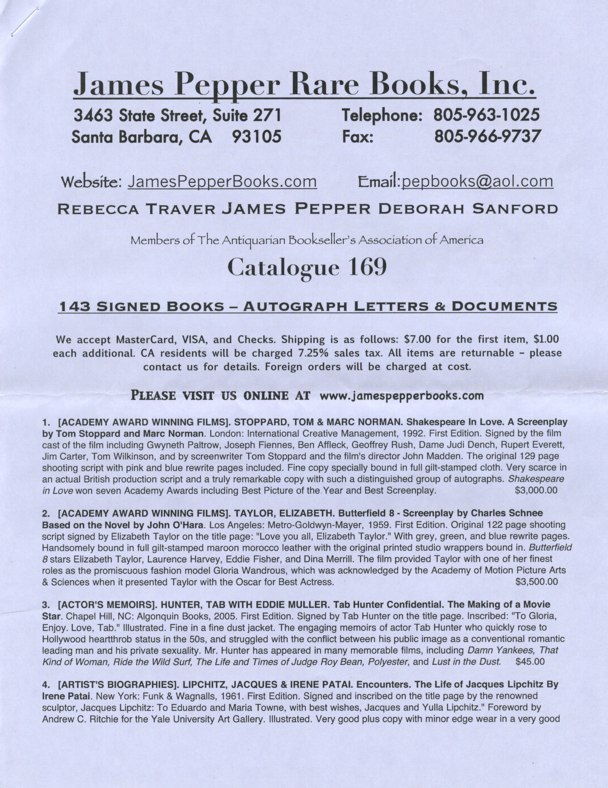 From James Pepper Rare Books comes a new collection: Catalogue 169. 143 Signed Books -- Autograph Letters and Documents. Pepper's catalogues generally feature many literary first editions and items related to theater and film, and this is no exception. However, this one is unusual in that all of the items are signed, including many with letters or inscriptions. Often we get to see a few words from the writers that were not intended for publication. This is a catalogue filled with familiar works and names, great additions to a collection focused on individual writers and performers. Here are a few of those 143 books and documents.

Item 25 is a most interesting and important letter between two major, though very different, writers. It is a typed, signed ("G.B.S.") 1922 letter from George Bernard Shaw to T.E. Lawrence, aka Lawrence of Arabia. Lawrence privately printed eight copies of The Seven Pillars of Wisdom, which he sent out to some closest friends for comment. He was unsure whether it should be substantially revised or even whether it should be saved at all. In his response, Shaw urges "patience" in making a decision, while admitting he had not yet read the entire book. Shaw notes he has "sampled" it, but had not had a chance to completely read the work as his wife has "seized" it to read herself. From what he has read, Shaw states, "obviously there are some things in it that you cannot publish," but he is adamant in calling for its preservations. Writes Shaw, "Destruction being out of the question: If I thought you capable of that I should take the book to London, burn down my house here, and tell you that the book had perished in the flames." As for the book's length, Shaw observes, "I read the Bible in my youth straight through from Genesis to the Epistles; and I daresay I shall survive your Seven Pillars." However, he notes that an abridgement will be needed for general circulation. Shaw would later write to Prime Minister Baldwin (presumably after completing the book) that the work was a "masterpiece." Letter priced at $25,000.

Item 43 is another letter, this one from physicist/genius Albert Einstein to his son, Hans Albert. The date was October 27, 1938, the Einsteins having already escaped Germany and Nazi persecution, and with war now looming on the horizon. Along with comments on family matters, the great scientist points out, "...it is lucky that you're here now and no longer camped on the volcano -- especially given that you're afflicted with the name Einstein which is detested in Germany." $11,000.

Item 124 is the Deluxe Film Edition of Frau Im Mond ("Woman in the Moon," which would later be known in English as Rocket to the Moon). The book was written by Thea Von Harbou, while the screenplay for the film was prepared by Director Fritz Lang, her husband. The two cooperated on films from 1922-1933, including the notable Metropolis. This film edition was produced in a limited run of 100 copies for the film's premier. It is signed by both Lang and Von Harbou. The two created many works of science fiction, but soon the events which tore Einstein from his homeland would rip this partnership apart. Von Harbou was attracted to the Nazi cause; Lang was horrified by it. They divorced in 1933, and Lang fled the country the following year. Von Harbou would fade into obscurity after the fall of Germany, while Lang would have a continuing illustrious career in America. $12,500.