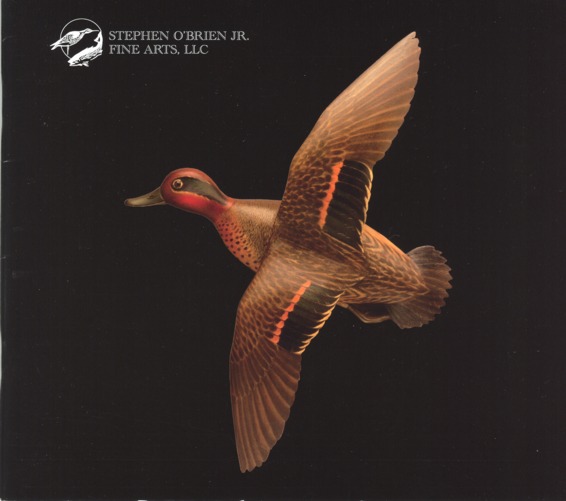 Here is a catalogue uncommon for our reviews. It is certainly not of books, and only tangentially might be called “ephemeral." However, one of the favorite subjects for book collectors is sports and sportsmen, and in the days before baseball and football were massively popular, sports hunting was of keen interest, particularly for those of means. This brings us to the latest catalogue of Stephen O'Brien Jr. Fine Arts. It is entitled Select Carvings by A. Elmer Crowell (1862-1952) . Crowell was both a master sportsman and artist, and those who collect in the field of hunting, particularly of waterfowl, will certainly appreciate these fine carvings.

Crowell grew up on a cranberry farm in East Harwich (Cape Cod), Massachusetts. Though not a hunter, his father gave young Crowell a shotgun when he was twelve. Crowell took to hunting like...well...a duck to water. He began devising ways to get waterfowl to stop at the lake near his home on their migrations. Although he carved some decoys early on, Elmer's preferred means was live decoys. He would train tethered ducks and geese to lure wild ones their way. He became something of a legend, and hunters sought his help.

Around 1900, Dr. John C. Phillips, sportsman, author, and Associate Curator of Birds at the zoological library at Harvard, hired Crowell, who would remain in his employ for ten years. Along with building better blinds and training his live decoys, Crowell began carving more. He carved both decoys and simply decorative works. However, this would remain a secondary activity until 1912 when Massachusetts passed a law outlawing the sale of migratory birds. Depletion of these bird species by clever techniques such as those employed by Crowell alarmed conservationists, who won their battle with the hunters in the state legislature. Unable to trade in live decoys any longer, Crowell turned to his carving skills to fashion wooden decoys and decorative carvings. This he would do for most of the remainder of his long life.

It is impossible to describe Crowell's carvings with words, other than to note that his great familiarity with the species he carved enabled him to achieve exceptional reality in his works. He carved and painted with meticulous attention to detail. His works are prized by collectors, the best having reached prices in excess of $1 million. Of course, not all are quite so pricey, but you probably would not want to use one of Crowell's carvings as an active decoy today. However, one would look spectacular on the shelf next to your antiquarian hunting books.

Stephen O'Brien may be reached at 617-536-0536 or visited online at www.americansportingart.com. The gallery is located on Newbury Street in Boston.