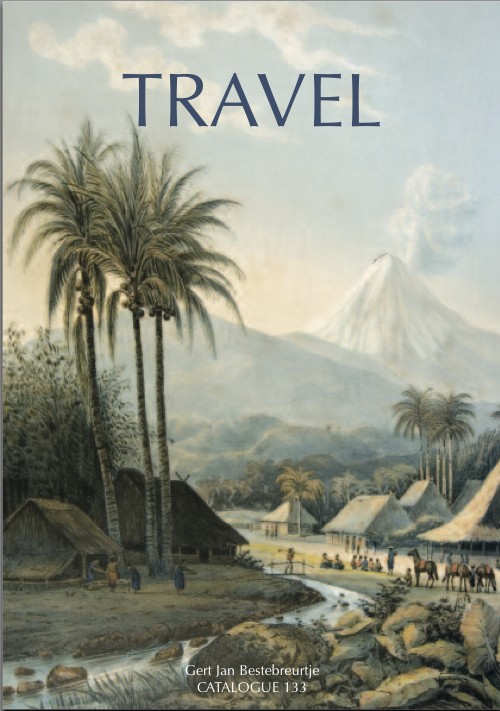 From Gert Jan Bestebreurtje Rare Books of the Netherlands comes their latest catalogue: Travel. This includes books from what were far away lands to most Europeans over a century or more ago. One of those lands was America, and we note an unusually large number of American works in this the Dutch bookseller's 133rd catalogue. We will focus primarily on these items since we usually do not see such material in a Bestebreurtje catalogue, but Dutch and other European collectors will, as always, find plenty of interesting works within the latest collection. Now for a few samples of the 200+ items available.

One of the earliest major American agitators against slavery was Anthony Benezet of Philadelphia. Benezet studied the slave trade in the Americas and wrote about what he discovered in Some historical account of Guinea, its situation, produce, and the general disposition of its inhabitants. With an inquiry into the rise and progress of the slave trade, its nature, and lamentable effects. Benezet's work was particularly influential in England, where it was published (London). Offered is a "new edition" from 1788. Item 11. Priced at €1,100 (Euros or approximate US equivalent of $1,613).

Item 61 is another strong attack on slavery by the Ohio abolitionist congressman Joshua Giddings. The title of this 1858 book is The exiles of Florida: or, the crimes committed by our government against the Maroons, who fled from South Carolina and other slave states, seeking protection under Spanish laws. Giddings minces no words in his indictment of the United States government for chasing slaves who escaped to Florida, both while it was still under Spanish dominion and after being acquired by the U.S. However, Giddings not only focuses on the wrongs done to former slaves, but to the miserable treatment of the native Seminoles, who were brutally beaten into submission despite their determined efforts to resist encroachment into their lands. €160 (US $234).

For those interested in early mining in the American Southwest, item 6 is The Silver Country or the Great Southwest. This work covers not only mining but other physical features, agriculture, climate, topography and more about Mexico and the territory acquired in the Mexican cession - California, Arizona, New Mexico, Nevada, Utah and Colorado. Written by Alexander D. Anderson and published in 1877. €175 (US $256).

Item 64 was an attempted modification to the discovery of the headwaters of the Mississippi by Willard Glazier, then President of the American Geographical Society. Henry Schoolcraft had finally discovered the great river's source at Lake Itasca in Minnesota in 1832, but Glazier concluded that it actually began in a smaller lake above it, which he modestly named "Lake Glazier" (it is now known as "Elk Lake"). He announced his discovery in Headwaters of the Mississippi…and a full account of the discovery and location of the true source in a lake beyond Itasca. While it is true that Elk Lake drains into Itasca, and a couple of small streams drain into Elk Lake, Lake Itasca is still recognized by most as the source of the Mississippi River. This is an 1894 edition of a work first published in 1893. €125 (US $183).