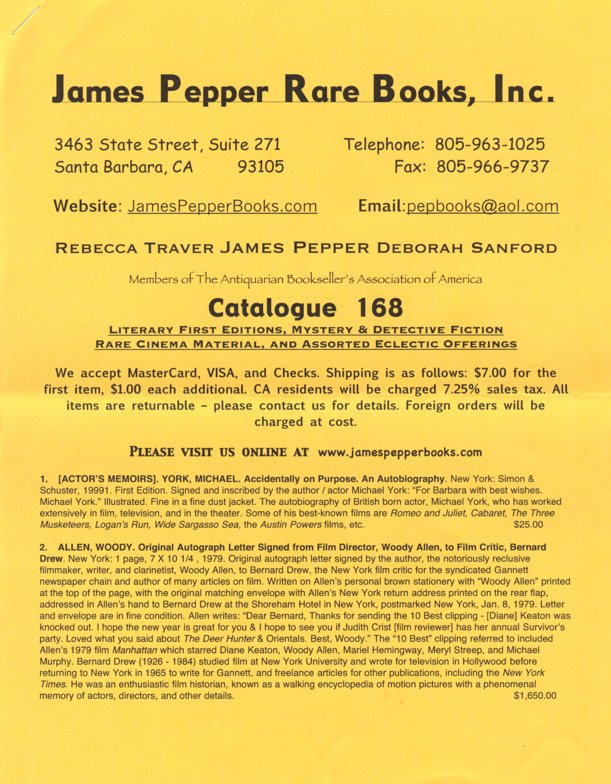 Catalogue 168 from James Pepper Rare Books presents a new collection within their field: Literary First Editions, Mystery and Detective Fiction, Rare Cinema Material, and Assorted Eclectic Offerings. Included are 143 items within these fields. They are, as always, an interesting group. Here are a few samples.

Item 3 will have to fit the "eclectic" topic since it clearly doesn't belong with any of the others. This is an obscure item relating to one of the most important cases ever in U.S. constitutional law. It is a manuscript copy of William Marbury's petition to the U.S. Senate to provide confirming documents of his appointment as a Justice of the Peace in the District of Columbia. Marbury was one of President John Adams' last minute appointments, who the new President, Thomas Jefferson, refused to provide with the commissions necessary to take office. Marbury sought the Senate's assistance, but since that body was now controlled by Jeffersonians, it had little inclination to help. Marbury then went to the Supreme Court, which declined his petition as well, and Marbury's personal lack of success is of little consequence to the nation. However, it was in reaching this decision that the Supreme Court established the supremacy of the constitution over ordinary laws, and most importantly, that the courts had the power to strike down laws adopted by the other branches of government if they conflicted with the constitution. This decision was of an enormous consequence, for without it, all of the protections in the Bill of Rights would be moot, for there would be no one to enforce them. This copy of the petition came from the papers of Nathan Read, a Federalist congressman from Massachusetts. Priced at $9,500.

Item 80 is an original, unpublished work by an actress and writer of the 1950s, Leueen MacGrath. She is a bit obscure though appearing in several films and Broadway plays, but reached some greater milestones during the eight years (1949-1957) she was married to famed playwright and director George S. Kaufman. She co-wrote the very popular musical "Silk Stockings," which featured music by Cole Porter. Offered is a signed manuscript of 429 pages entitled There and Back, circa the late 1960s. It is taken from her diaries, but omits specific names and places. Among the topics, Pepper informs us, are "Byzantine Art, I Ching, murder, lesbianism, assisted suicide, Venice, Rilke, and always the life of the writer and the habit of writing." If you like it, you could publish the first edition. $1,000.

Here is a book that maybe shouldn't have been published, at least according to its author. It is an early work from science fiction writer K.W. Jeter -- Morlock Night. This 1979 first edition paperback is a continuation of H.G. Wells' "Time Machine." In a fit of brutal honesty, Jeter has inscribed this book to collector Roy Squires, "Roy, Tim [Powers] & I should both thank God that there are editors who'll buy this kind of crapola." Here is your chance to join those editors! Item 135. $200.