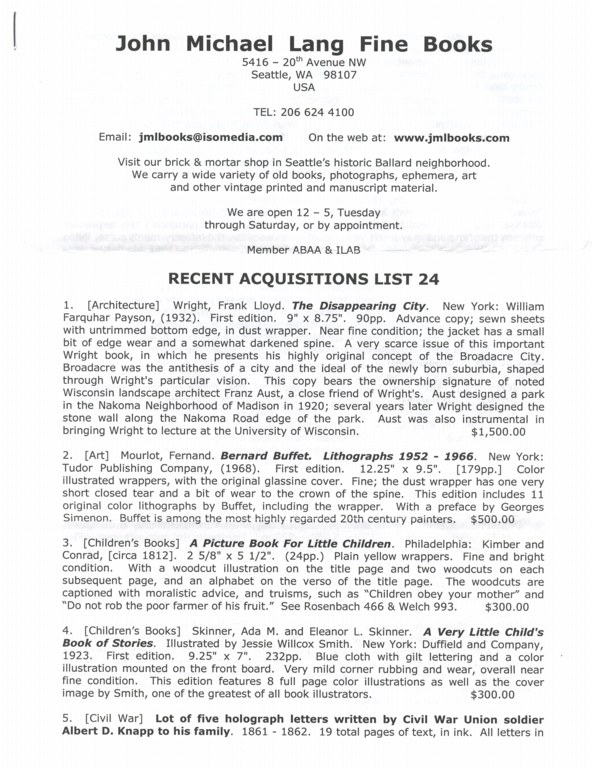 John Michael Lang Fine Books has released a new list of books available, Recent Acquisitions List 24. These are not long lists, but nonetheless include a wide range of materials that can fit with many different collections. You never quite know what you will find in one of these lists. Among the topics covered this time are literature, railroads, the Civil War, miniature books, art, photography, Native Americans, personal letters, anti-Chinese riots, western Americana, travel, film, fore-edge paintings, children's books, architecture, and kissing. Let's take a look.

Item 23 is a book filled with photogravure images of the Pacific Northwest at the turn of the century. The title is Art Work of Seattle & Alaska, with photographs by W.D. Harney, Frank H. Nowell, Asahel Curtis and others. It was published by the W.D. Harney Photogravure Company of far-off Racine, Wisconsin, in 1907. It includes pictures of scenic wilderness, Indians, mines, the Seattle waterfront, and most interestingly, Roald Amundsen and the crew of the ship Gjoa. Amundsen and his men began the first successful voyage through the long-sought Northwest Passage in 1903, entering from the Atlantic side. They became the first to make it through to the other end late in 1905. This photograph was likely taken the following year. As significant as this journey was, finally achieving what four centuries worth of earlier attempts had failed to do, Amundsen is even better known for the journey he took in 1911, where he became the first man to reach the South Pole. This book is priced at $650.

The tragedy of America's Civil War still moves people's emotions to this day. Perhaps that is why that war is still so heavily collected. Item 5 is a collection of five handwritten letters from a Union soldier from Wisconsin to the folks back home. In the first letter Albert D. Knapp writes from Fort Snelling in Minnesota that he has signed up for duty. In the second, he expresses his enthusiasm for the task: "I hope we have the privilege of charging on Richmond." Next, he writes of his journey from home to Louisville, where "about one hundred negro girls with flags [followed] us through the streets." He notes that the people of Louisville are "very kind," although there is some secessionist sentiment. He now begins to express some concern about "falling in battle." By the next letter, he reports that he has become ill with some sort of bad fever and that other soldiers have been stricken with the measles. He inquires of family whether he ever had the disease, as other soldiers were now being "vexinated" against it. By the fifth letter, he articulates some concerns about war profiteering and the poor quality of their arms, and notes that his duties have still been limited to drilling and guarding bridges. Sickness evidently still plagues the camp, but he predicts "if I live till next year I will see Wisconsin again." Knapp did not see Wisconsin again. Within three months of this letter of January 27, 1862, he came down with typhoid and died, apparently without ever seeing combat. Knapp was 17 or 18 years old. Lang points out that in the Third Minnesota Infantry with which he served, only 17 enlisted men died in action, while 275 succumbed to disease. $875.