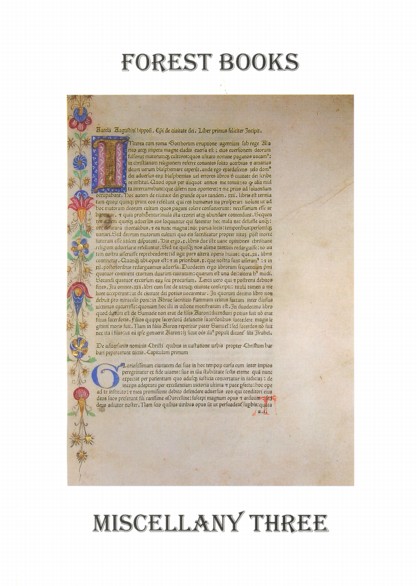 The latest catalogue from Forest Books of Redmile, Nottinghamshire, England, is their Miscellany Three. A "miscellany" is hard to describe, since it can contain just about anything. For an American reader (though perhaps not a British one), a common thread is the material is mostly quite old, many 18th to early 19th century works, some even older. Indeed, it starts with a book from Naples not young even by incunabulan standards (is that a word?). It is a printing of St. Augustine's De Civitate Dei from 1477. Other books offered are not quite so antique, and most are in English, so they are easier for this writer to describe. Now, here are a few descriptions.

Item 20 recounts a spectacular 45-mile voyage through the air, in just two hours and fifteen minutes. That may not sound so impressive today, but the year was 1784, within a year of the first manned balloon flight. Jean Pierre Blanchard's account was published that year in An Exact and Authentic Narrative of M. Blanchard's Third Aerial Voyage, from Rouen in Normandy, on the 18th of July, 1784. Blanchard and American Dr. John Jeffries would make the first successful flight across the English channel the following year, and Blanchard would visit America a decade later, where his flights would be viewed by George Washington and many other of America's early leaders. He also made America's first airmail delivery during his visit. Blanchard even demonstrated the first successful parachute jump, though the actual leap was performed by an unwitting animal rather than Blanchard himself. Priced at £875 (British pounds, or US equivalent of roughly $1,773).

Item 53 is an amazing tale of the dangers faced by seafarers of another generation. The title says it all: A Faithful Account of the Distresses and Adventures of John Cockburn, Mariner, and Five other Englishmen; Who were taken Prisoners by a Spanish Pyrate, treated in the most Inhuman Manner, set on Shore, on a Uninhabited Island, Naked and Wounded, and obliged to Travel over Land from the Gulf of Honduras to the Great South-Sea, being 2400 Miles. This was a story so fanciful as to be unbelievable, but Sabin, quoting Lowndes, tells us it was true – "A curious and authentic narrative, and appeared so extraordinary as to be looked upon as little better than a romance." Cockburn was an ordinary seaman who, with a few crewmates, was left on an uninhabited island by pirates. They eventually made their way to shore in Mexico and proceeded on their long journey through Central America to find transport back home. Along with recounting the terrible sufferings of these men, the book provides much information about the natives and natural history of a land not well known to the outside world in the early 19th century. Offered is a 1740 edition of a story published in many editions under different titles beginning in 1735 (the journey took place in 1730-31). £895 (US $1,813).