A Collection of Modern Literature from Ken Lopez Bookseller 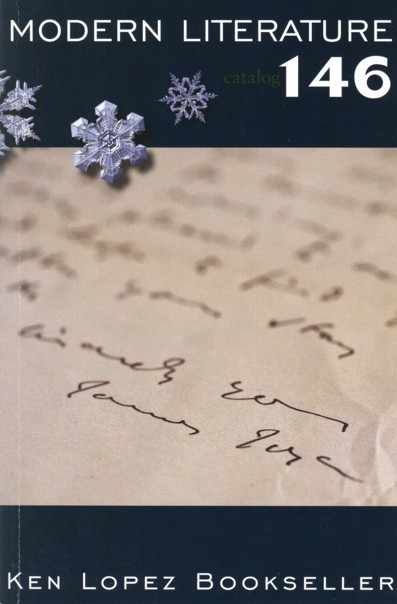 A Collection of Modern Literature from Ken Lopez Bookseller

Just out is the latest catalogue, number 146 of Modern Literature from Ken Lopez Bookseller. Offered are primarily first and prepublication editions of works published from the mid-20th century to the present. There are a few earlier exceptions, but most of these works were new during the lifetime of many if not most of our readers. Of course, very few of us had the foresight to pick up novels by the right unknown authors when they were first published. Fortunately, Ken Lopez is here to give us a second chance. Now, let's look at a few samples of the material he has to offer in his 146th catalogue.

Here is one you might have missed at the time -- Carrie, by Stephen King. This is a first edition, from 1974, of the first novel from an author who has gone on to become one of the best selling writers of all time. It did not take long for the master of the occult and horror to become wildly popular, as this novel was converted to a most successful film in 1976. This copy contains a 1982 inscription from King. Item 135. Priced at $4,500.

Item 7 is a very unusual compilation of "works" by various noted authors. It even includes Harper Lee, who published virtually nothing either before of after "To Kill A Mockingbird." The title is The Artists' and Writers' Cookbook, and it was published in Sausalito in 1961. Among the culinary writers represented are Lillian Hellman, Upton Sinclair, Pearl Buck, James Michener, and many more. Ms. Lee's contribution is not Mockingbird pie, but something known as "cracklin' bread." Sounds southern. $65.

Item 46 is the true first edition of William S. Burroughs' The Soft Machine. This book was published in Paris in 1961. Burroughs was evidently not pleased with the work, and undertook a substantial rewrite before it was finally published in America in 1966. This copy was inscribed in 1988 to Burroughs' friend Nelson Lyon. $1,500.