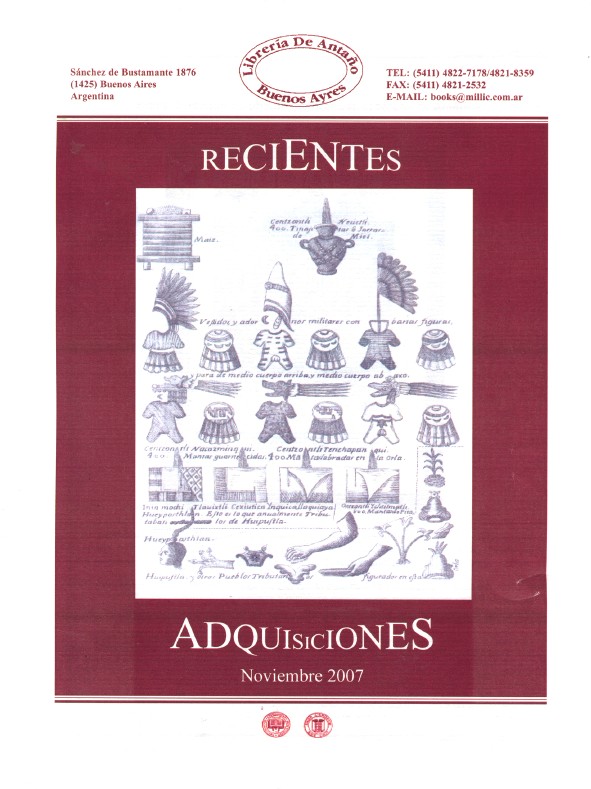 Libreria de Antano of Buenos Aires has issued a catalogue of Recientes Adquisiciones (Recent Acquisitions). As the title implies, this catalogue is in Spanish, which is appropriate for a collection of books primarily from Latin America and Spain. However, that will limit this writer to brief descriptions of the material. Undoubtedly, collectors of Spanish America are more facile with the language and will appreciate reading a copy of this catalogue. We invite you to contact the seller directly. Now, we will attempt to describe a few of the items in this group of latest acquisitions.

Item 23 is what Libreria de Antano describes as the best and most desirable edition of Antonio de Solis' Historia de la conquista de Mexico (History of the conquest of Mexico). Originally published in 1684, this is the 1783 Madrid edition of a book that went through many dozens of editions in many languages in the two centuries following its publication. Solis had access to much information, including the letters of Hernan Cortes, from which to compile his history. Priced at $8,500.

Item 12 is the first Spanish edition of John Byron's voyage around the world, Viage del Comandante Byron alrededor del mundo... published in 1769. Byron was an Englishman who sailed around the world, accomplished without the loss of a single man. The early editions of Byron's work reinforced the rumors, dating all the way back to Magellan, of the Patagonian giants on the southern tip of South America. At this point, they were portrayed as being nine feet tall, though subsequent reports of Byron's voyage would reduce that to a more believable six feet six inches. The first Spanish edition of this work is notable for being the first to contain the map of the Straits of Magellan. $12,000.

Item 17 is another voyage around the world, but we'll switch from Spanish to French for this one: Voyage autour du monde... by Louis de Bougainville. Bougainville's journey lasted from 1766-1769 and was the first French circumnavigation of the globe. This first edition was published in 1771. While a couple of centuries removed from the first trip around the world, Bougainville was a scientist and sharp observer, adding much to the knowledge of nature and the history of South America and the Pacific islands. $9,000.

And here is a book in English -- Travels through Spain in the years 1775 and 1776... The traveler/author was Henry Swinburne, a wealthy British subject who did quite a bit of traveling and writing. Along with providing information about Spain of the day, Swinburne drew pictures of the local architecture. $2,900.

Item 43 is Fervor de Buenos Aires, the first book by Jorge Luis Borges. This is a book of poems, though Borges would in time be better known for his essays and short stories. The poems speak of his native Buenos Aires, always central to his life. This 1923 edition was inscribed to Alvaro Melian Lafinur, Borges' Uruguayan uncle, who was also a writer and diplomat from that country. $35,000.