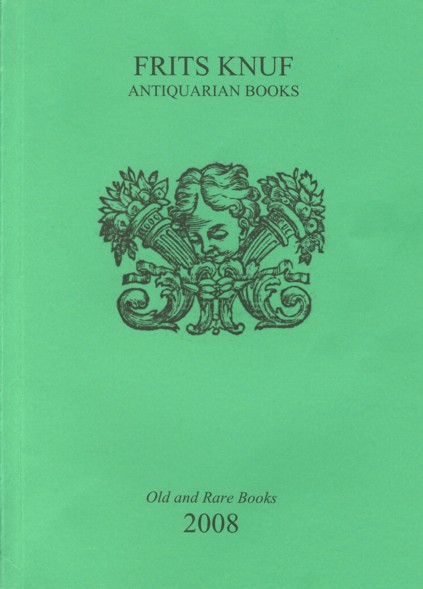 Recently arrived is Old and Rare Books 2008 from Frits Knuf Antiquarian Books of Paris. Knuf is a specialist in the "books about books" field, with a focus on European and English works. This latest presentation includes catalogues of many book collections, in libraries, private collections, or offered for sale at auction or by booksellers. There are books on the history of books, type, libraries, banned books, and more, including a few that don't fit the mold quite so neatly, such as a classic instruction manual on swimming. This is a great catalogue for those who collect in the book arts, especially with a European orientation. Here are a few examples of what is offered.

Where better to start than with the giant of all book catalogues, A Catalogue of Books, issued by London bookseller Henry G. Bohn in 1841. Commonly known as the "Guinea Catalogue," Knuf describes it as "the biggest catalogue ever issued by a bookseller." While we cannot attest to this, I have certainly never seen anything else that comes close to the monumental 23,208 books listed for sale in this catalogue. They are listed alphabetically under 27 headings, each book fully described. Priced at €750 (Euros, or approximate US equivalent of $1,077).

Item 21 represents a major breakthrough in understanding the language, and with that the history, of ancient Egypt. The work is Precis du Systeme Hieroglyphique des Anciens Egyptiens by Jean Francois Champollion. Champollion was a master of languages, including Coptic, an old Egyptian tongue still understood, unlike ancient Egyptian. Using his knowledge, he was able to decipher the ancient Egyptian hieroglyphs from the Rosetta Stone, which was written in Egyptian, Coptic and Greek. Once he mastered the complex language, where glyphs could either represent concepts or sounds, he could translate the meaning of other ancient writings, indecipherable at the time. This first edition of his book was published in 1824. €6,000 (US $8,622).

Sometimes national pride can get in the way of accuracy. Item 34 is one such example, a children's book by Petrus Dusseau, published in Amsterdam in 1839. The title is De Boekdrukkunst en Derzelver Uitvinder Laurens Jansz. Koster. It informs children that it was Koster, of Haarlem, who invented printing, not Gutenberg. Not many believe that any more, but it was a hard claim for the Dutch to surrender. Supposedly, Gutenberg's partner had earlier worked with Koster and stole his typesetting equipment, but no evidence has ever been found to establish this claim. In fact, it was not made until over a century after Gutenberg began rolling his Bibles off the press. €850 (US $1,222).