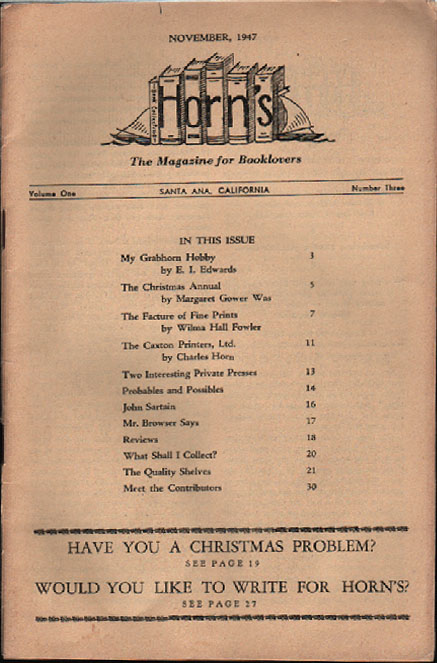 I’m not going to tell you how to get rich. If I knew, I wouldn’t tell you anyway. But, I will make it a little easier by telling you one business to avoid. Don’t publish a magazine for book collectors. That may not sound like much help, but there were many others before you who could have saved themselves a lot of heartache if they’d had this advice.

Recently, the Americana Exchange made a couple of large purchases of old booksellers’ catalogues as part of a process of greatly expanding its bibliographic database. The sources and number of records members will be able to access in the months ahead is amazing, but that’s another story. Among the piles of catalogues were a couple of boxes of book collectors’ magazines. The common thread among these old magazines is that none of them exists today. At some point, they all threw in the towel. There is no Time, Reader’s Digest, or National Geographic among them.

Special note needs to be made of one of these publications: AB Bookman’s Weekly. Bookman’s Weekly was probably the trade’s most important magazine of the second half of the 20th century. It began publication in the late 1940s and survived for half a century, undoubtedly prospering for much of that period. Sadly, it too closed its doors, citing “financial problems” in 1999. The ability to post books for sale on the internet, much cheaper than having to pay for advertisements in magazines, undoubtedly ate into this venerable publication’s income. It is no more.

There are still some magazines for book collectors, and we certainly wish them well. For example, Book Source Magazine, published by John Huckans in Cazenovia, New York, is an excellent publication. You may want to subscribe. They can be found on the web at www.booksourcemagazine.com.

This brings us to one particular publication I found in these boxes. It was called Horn’s Magazine. Does anyone remember it? If so, I’d like to hear from you. Interestingly, it began publishing around the same time as AB Bookman’s. The copy I have is their third issue, from November 1947. It did not share in Bookman’s longevity. I do not know precisely how long it survived, but what little I was able to find suggests that it was not a long time.

Horn’s was published and edited by Charles W. Horn, with help from Zonetta C. Horn, presumably his wife. Their mailing address was a post office box in Santa Ana, California. It was described as “unique in the book world: independent in its viewpoint, always constructive in its criticism…” Evidently other book magazines of the time must have been mouthpieces for someone’s special interests and destructive with their criticism.