Legal Cases and the Law from the Lawbook Exchange 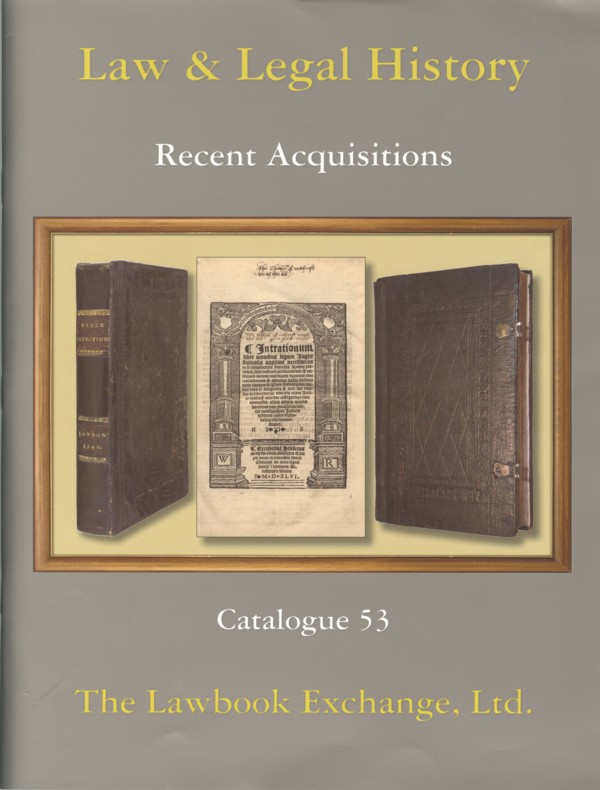 Legal Cases and the Law from the Lawbook Exchange

Recently off the press is Catalogue 53 of Law and Legal History from the Lawbook Exchange. Most items in the catalogue fit the category of "antiquarian and scholarly," though this time there is a greater mix of items that will intrigue readers beyond the legal community. In other words, you don't have to be a learned attorney or law librarian to appreciate many of the titles offered in this latest catalogue. Some give a look at history, politics and theology as well as law. There is even some humor! Here are a few such books now available from the Lawbook Exchange.

Item 90 is a parody of a trial that never took place. The Reverend Alexander Fletcher was a very popular preacher in 19th century England. He filled his churches with devoted followers, and was especially noted for his way with children and young people. Fletcher was as well a supporter of noble causes, helping the poor, reforming prisons, and promoting the abolition of slavery in the United States. Frederick Douglass spoke in his chapel in London. However, in 1824, the good Reverend was the subject of a most embarrassing suit. Eliza Dick, daughter of a minister, sued him for breach of promise to marry her. No verdict was reached in the civil court, which is just as well, as it is hard to imagine how unhappy that marriage would have been had the judge dragged him down the aisle. Fletcher reportedly apologized profusely and paid all her court costs. However, the ecclesiastical court was not so kind, and he was suspended from his office. Fletcher did not lose any popularity and would form another church with thousands of parishioners. The remaining 35 years would see him a beloved and influential clergyman, and 21 years after the "trial," he would become a husband (not to Miss Dick). The book is entitled Trial of Rev. Alexander Fletcher, A.M. Before the Lord Chief Justice of the Court of Common Sense... published in 1825. In this parody, the trial is held, and a jury of notable Englishmen finds the Reverend guilty. Priced at $350.

Alexander Stephens was an unreconstructed Confederate to the end. Stephens was the Vice-President of the Confederacy throughout its existence. Oddly, he came very late to secession. He spoke against secession at the Georgia state convention that authorized that state to secede. However, once the decision was made, he became an enthusiastic supporter. He was elected Vice-President of the Confederacy in February 1861, and the following month gave his "Cornerstone Speech," a strong defense of slavery. Stephens claimed that Jefferson was wrong in declaring all men were equal. The cornerstone of the confederacy, he stated, "rests upon the great truth that the Negro is not equal to the white man; that slavery -- subordination to the superior race -- is his natural and normal condition." Stephens was briefly imprisoned after the war, and later went on to serve in Congress and was Governor of Georgia at the time of his death. Item 86, dated 1868, is entitled A Constitutional View of the Late War Between the States... and in it Stephens still argues that states have a right to secede. $95.