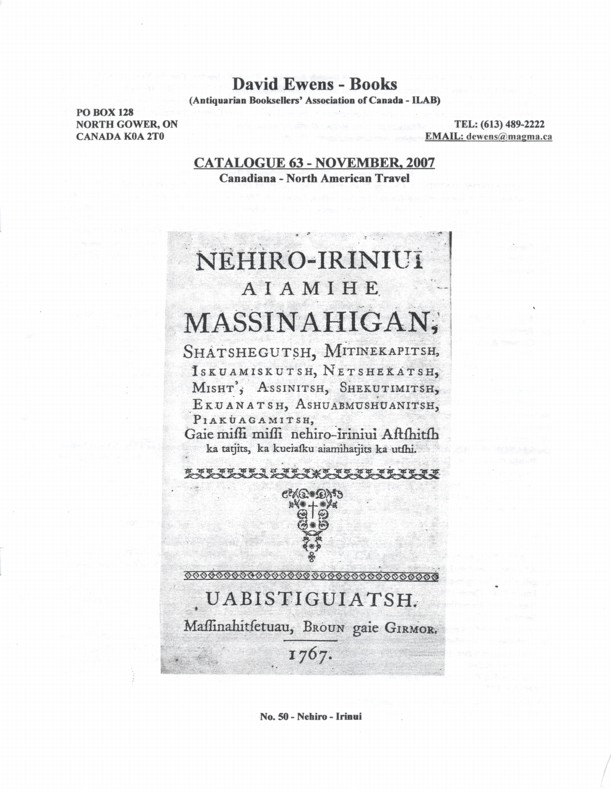 We recently received Catalogue 63 of Canadiana -- North American Travel, from David Ewens Books. As the title suggests, these are primarily works relating to travel and exploration in Canada. However, some are extensive histories, and a few are further removed from that title though appropriate for a collector of Canadiana, such as a juvenile, a music book, poetry, native language printing, some county atlases, and the like. All in all, this is an exciting collection of works related to Canada, along with a few excursions into the land which runs south of the Canadian border.

Item 49 is Travels Into North America by Swedish visitor Peter Kalm. Kalm was a Swedish botanist who traveled extensively on both sides of the Canadian border during the middle of the 18th century. While his primary interest was natural history, he provides in depth information about the social and political situation, with particular focus on Swedish settlements in America. Volume one deals primarily with Pennsylvania, volume two New Jersey and the Swedish settlements, and volume three Canada, particularly Montreal and Quebec City. Priced at $5,000 (all prices are in Canadian dollars, which we will not translate to U.S. dollars as the currencies are virtually equal at this writing).

"Madeleine Blair" (pseudonym) was also a foreign traveler to Canada, but of a very different sort. She was an American prostitute who went to Winnipeg to make a living in her trade. Ms. Blair's story is that of a young girl with a loving father who turns alcoholic, becomes abusive, and is no longer able to support the family. They move downward, ending up living in the worst neighborhood in town, also the local "red light" district. Eventually, she becomes caught in the web, moves to Canada, and finally finds her redemption. Along the way, she details the causes and horrors of her former vocation, and seeks to dispel the notion of the day that prostitutes were women held against their wills in "white slavery," rather than women who made a choice, albeit one perhaps dictated by their circumstances. Her book is Madeleine: An Autobiography. Item 9. $450.

Item 24 is what Ewens describes as "probably the first book of music by a North American Native..." The book is Indian Melodies. By Thomas Commuck, A Narragansett Indian. Harmonized By Thomas Hastings, Esq. It was published in 1845 for the Methodist Episcopal Church in New York. Commuck had converted to Methodism earlier. He compiled a group of original songs set to native melodies, naming them after the tribes where the melody originated, including the Hurons, six nations of the Iroquois, Mohawk, Chippeway and more. The harmonizer of this work, Thomas Hastings, is best known as the composer of the melody for Rock of Ages. $3,000.