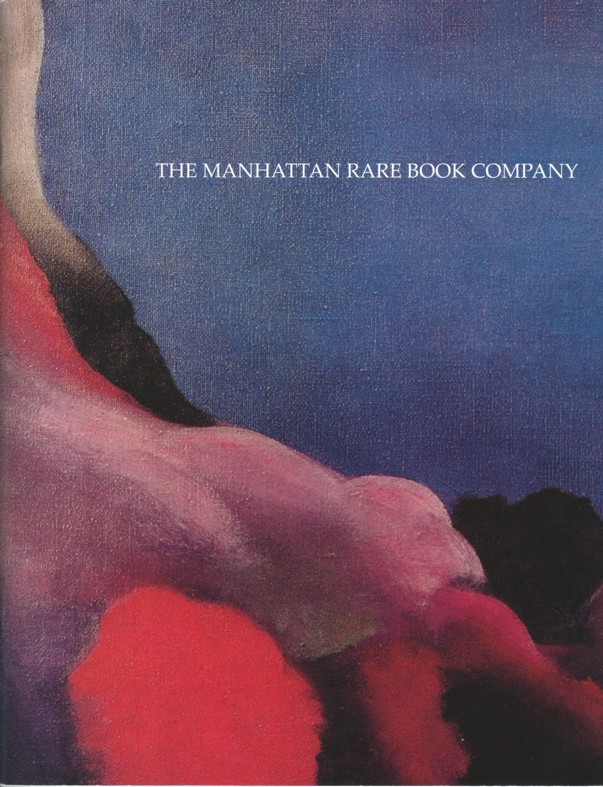 The Manhattan Rare Book Company has issued a remarkable catalogue to open the new year. I have searched in vain for a title for this catalogue or even a number. I find none other than the motto: "building fine collections one book at a time." So we will skip the title and move to a description of the contents. What you will find is primarily works of literary or artistic merit, with a few items of politics and history, science, along with some children's books. The greatest concentration is in literary first editions from the best-known authors, but as noted, that is not all. Here are some samples of the 85 items in this extensively illustrated catalogue of important works.

Is there a more popular American poem than Edgar Allan Poe's The Raven? Perhaps, but it doesn't immediately come to mind. Item 37 is a copy of the first appearance of this classic, as it appeared in The American Review in 1845. Poe published under the pseudonym "Quarles," though there was no need to hide behind anonymity with works like this. Manhattan notes that it immediately became one of the most recited poems in the country, though it did little to lift Poe's ever-present financial burden. Offered is a bound volume of the issues of January-June 1845 of The American Review, which contains this poem. Priced at $3,800.

Item 6 is a notable work with a most intriguing inscription. The book is In Cold Blood by Truman Capote. The inscription states, "To my dearest Marion; hope you enjoy this my dear -- it was written with you in mind." Written with you in mind? In Cold Blood is the story of two criminals who senselessly murder a Kansas farmer, his wife and two children. Just what did Capote have in mind for poor "Marion?" $2,200.

We will continue this Truman Show with Mr. President, William Hillman's record of Harry Truman's presidency. It is inscribed by Mr. President himself to James E. Noland, a congressman from Indiana. Item 63. $1,800.

Galileo was pilloried and almost executed for blasphemy for claiming the Earth was not the center of the universe, but today he is about as controversial as Barney the Dinosaur. Charles Darwin was not so lucky. Some heresies are better able to stand the test of time. Item 16 is Darwin's The Descent of Man, a first edition, first issue from 1871. Darwin had first enunciated his theory of natural selection in the "Origin of the Species," but it was not until this book that he applied his theories in detail to humans. It was also in this work that he first used the "E" word to describe his theory -- evolution. $12,500.