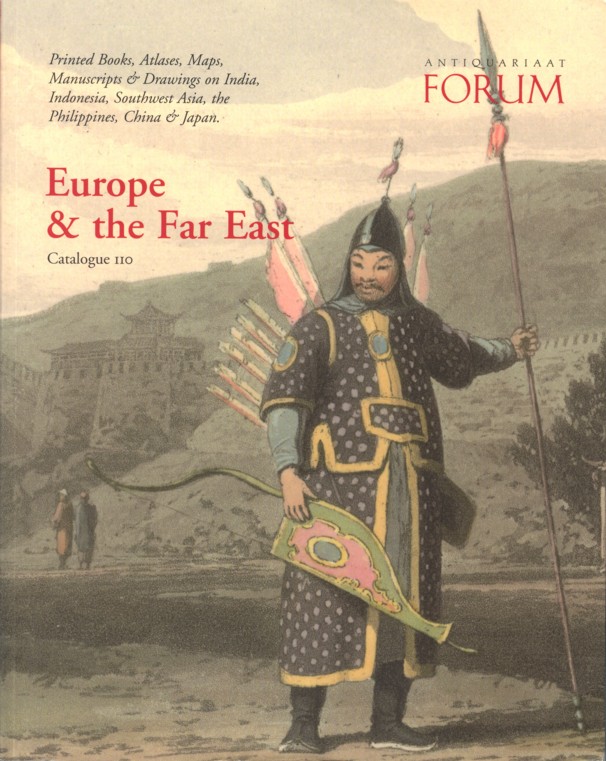 We recently received a magnificent catalogue from the Antiquariaat Forum of the Netherlands, entitled Europe and the Far East. Normally we do not comment on the art of the catalogue, only the material described within. However, once in awhile one comes along that merits, if not requires, special mention. This is a beautiful and highly informative catalogue, well illustrated with thorough descriptions of the 268 books and manuscripts offered. There may be 268 items described, but there are 269 collectible works here, the three-quarter inch thick catalogue itself being number 269. Now we will look at what is inside.

The title has two subheadings that further describe the content: An Eventful History of over 500 Years, and Printed Books, Atlases, Maps, Manuscripts and Drawings on India, Indonesia, Southwest Asia, the Philippines, China and Japan. Those are good descriptions, as the works are mostly seriously antiquarian, many dating back to the 16th century, as well as more "modern" works from the 19th century. The works describe voyages and missions (both political and religious) to the countries of Asia and the Far East. While many, as might be expected, are Dutch missions, others run the list of colonial nations from Europe, and the writings come in many different languages. Finally, a concluding section contains some of the most important and magnificent of atlases, including those of Ortelius, Munster, and Blaeu. Next, we will look at a few specific examples.

Item 1 is an early Swiss geography, Epitome trium terrae partium, Asiae, Africae et Europae by Joachim Vadianus. While Vadianus may have been focused on the three parts of the world that do not include America, the world map in this 1534 book includes one of the earlier depictions of America, and is properly so labeled. The map shows South America in reasonably recognizable form, though North America is little more than a very long, narrow island. Vadianus describes the various features of the lands, though his intent was not so much to bring knowledge of the modern world to his readers as to help them identify the places described in the Bible. Priced at €49,500 (Euros, or approximately US $71,295).

The most important collection of voyages up to 1600, certainly for the English-speaking world, is Richard Hakluyt's The principal navigations, voyages, traffiques and discoveries of the English nation... Despite its title Hakluyt covered many voyages from outside of England as well as every English travel he could find. This is a particularly important work for an Americana collection as the third of its three volumes is devoted to travel to the New World in the era before the pilgrims set sail. Offered is a second edition from 1599-1600, expanded from the first but with a copy of the rare suppressed Cadiz voyage taken from the first edition. Item 10. €26,900 (US $38,750).