Antiquarian Law and History from the Lawbook Exchange 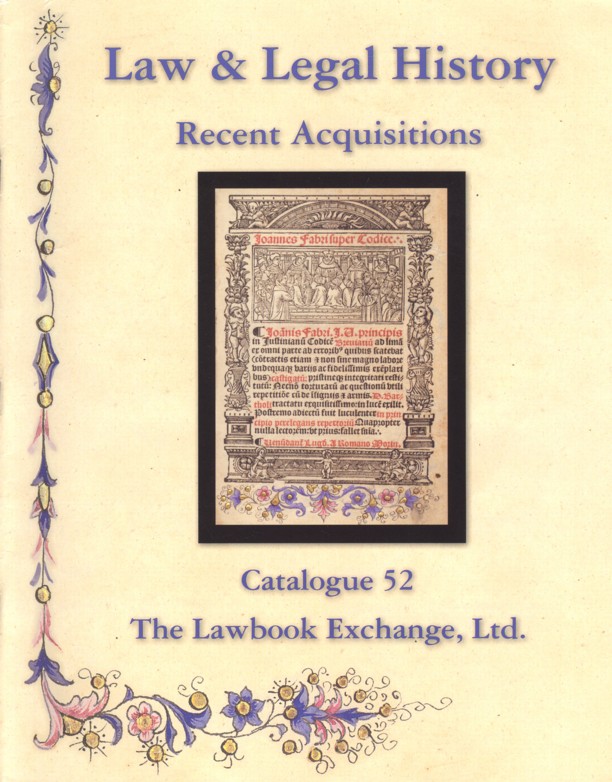 Antiquarian Law and History from the Lawbook Exchange

The Lawbook Exchange has gathered together 118 Recent Acquisitions in Law and Legal History to present in their 52nd catalogue. Included are primarily antiquarian works, most scholarly, some less erudite in nature, along with a few old Martindale (without Hubbell) law directories and a 1919 Kansas City School of Law yearbook (featuring a surprising number of female students for the time). There are also several compilations of the Justinian Code for those interested in Roman law and its influence on later European rules. Here are some of the legal tracts now available at the Lawbook Exchange.

Item 19 was an influential book, not just in the author's native England, but its American colonies as well. This is a 1719 edition of a work first published around 1680: English Liberties, Or, The Free-Born Subject's Inheritance, Containing the Magna Carta... Henry Care spells out rights that freemen had secured through many laws and acts over the years, starting with the Magna Carta. The work was used by George Mason in drafting Virginia's Declaration of Rights in 1776, and may have had an influence on Jefferson when he composed the Declaration of Independence. He owned two copies. The Lawbook Exchange notes, "Its influence is also evident on the Bill of Rights." Priced at $950.

Item 36 is a collection of lesser known essays concerning the ratification of the U.S. Constitution, compiled by Paul Leicester Ford. The title is Essays on the Constitution of the United States Published During Its Discussion by the People, 1787-1788. Ford researched the files of forty newspapers, plus several thousand other individual copies in various collections to come up with a series of notable contemporary essays for and against the adoption of that momentous document. Where the authors were anonymous, he tracked them down and provided their identity. Ford was a noted biographer, bibliographer and historian of America as well as a publisher. This item was published in 1892 in a limited edition of 500 by the Historical Printing Club of Brooklyn, which he helped form. Apropos to nothing, the multi-talented Ford died at the young age of 37, murdered by his own brother, who promptly took his own life. $400.

Now for a book that probably had more mass appeal at the time of its publication than the average legal treatise: Famous Divorces of All Ages, compiled by Charles Cowley and published in 1878. Cowley was a Massachusetts lawyer, and he compiled information on the divorce cases of the likes of Charles Dickens, George Sand, Lord Nelson, Charles Sumner, and Mary Queen of Scots, among others. Item 24. $250.

Here is an interesting legal document - an appointment as Justice of the Peace for Suffolk County, Massachusetts, of Daniel Webster. Surprisingly, this is not from early in his career, but from 1830, when he was already a sitting U.S. Senator. Why he would be appointed to this position at this time is not clear. The document is signed by Levi Lincoln, the longest consecutive-serving governor of the state and later a congressman. Levi was of the same family as Abraham Lincoln, dating back five generations. Item 113. $500.