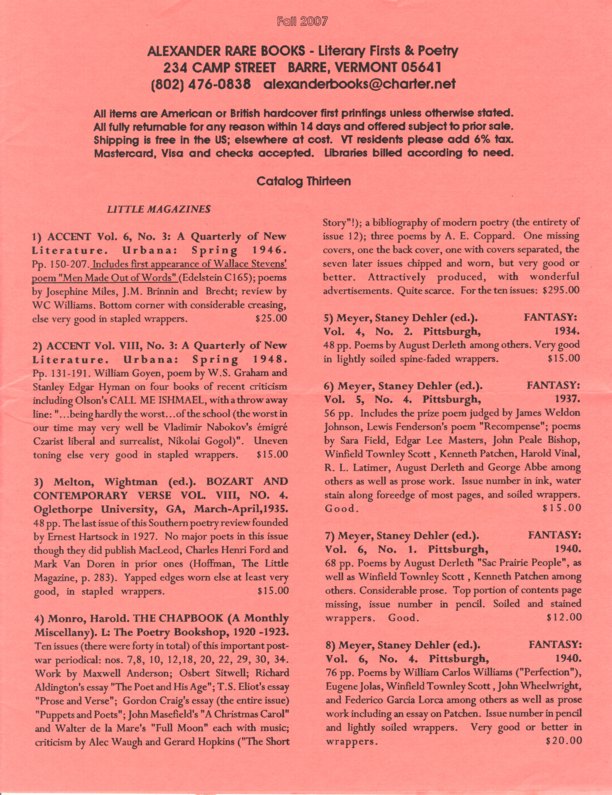 Alexander Rare Books has issued their Catalog Thirteen of Literary Firsts and Poetry. Among the features of this presentation are a collection of poetic broadsides, a selection of poetry magazines, modern literature, and books by and about Robert Frost. For those who collect in the fields of modern poetry and literature, there are many selections to be found. In fact, there are 186 of them. Here are a few.

Poet and fiction writer Julia Alvarez made her national debut in 1984 with the book of poetry "Homecoming." Perhaps her most familiar work is the 1991 work "How the Garcia Girls Lost Their Accent," a look at adaptation to American culture by four Latino sisters from her home country of the Dominican Republic. However, long before she became a familiar writer, while a graduate student at Syracuse University, Ms. Alvarez published poems in a university anthology. Item 78 is Syracuse Poems 1974, published a decade before Ms. Alvarez's first book was released. Priced at $35.

For those who would like even more poetry than the Syracuse anthology can offer, item 83 is a collection of chapbooks from Martin Booth's Sceptre Press. All told, there are 236 items, including 186 titles by 116 poets, with 150 of the items being signed. They date from 1968 through 1979. For obvious reasons, we cannot tell you who are all of the writers, or what are the titles, but Alexander can provide the details if you are interested. Sceptre was a British publisher, so most of the poets are English. It ceased publishing in 1981. $1,500.

Item 23 is a broadside printing of the Seamus Heaney poem Good-Night. This illustrated poem on a poster was published as part of the "Poetry in Motion" series for Northern Ireland's Ulsterbus public transportation system. The poetry was displayed on the public buses. This is a concept not commonly experienced on buses in America. $45.

Item 163 is the Traces of Thomas Hariot, written by Muriel Rukeyser and published in 1971. Hariot was a brilliant English mathematician, scientist and astronomer who lived from 1560 to 1621, but is virtually forgotten as he did not publish his discoveries. Most are buried in manuscripts he wrote, some in collections but others lost. However, he did write one published work, and if you can find an original, it is quite valuable. Hariot accompanied his friend Sir Walter Raleigh on at least one of his trips to America and wrote about it in 1588 in his "Brief and True Report of the New Found Land of Virginia..." Rukeyser, though a biographer here, was most noted as a poet, and this copy is inscribed by her to fellow poet Jane Cooper. $150.

Robert Frost was one of America's best-known poets of the 20th century. His first poem was published in 1894, but it was not until the book "A Boy's Will" was published in 1912 that he became a popular poet. For the next half century, he wrote and the nation read. A generation, even those not too familiar with poetry, will remember Frost on a cold winter morning in 1961, when he recited a poem at the inauguration of President Kennedy. Two years later, at the age of 88, Frost died. Item 100 is In Memory of Robert Frost, a memorial program including eleven of Frost's poems, dated February 17, 1963. The memorial was held at Amherst College, where Frost taught for several decades. $50.

Alexander Rare Books may be contacted at 802-476-0838 or alexanderbooks@charter.net.