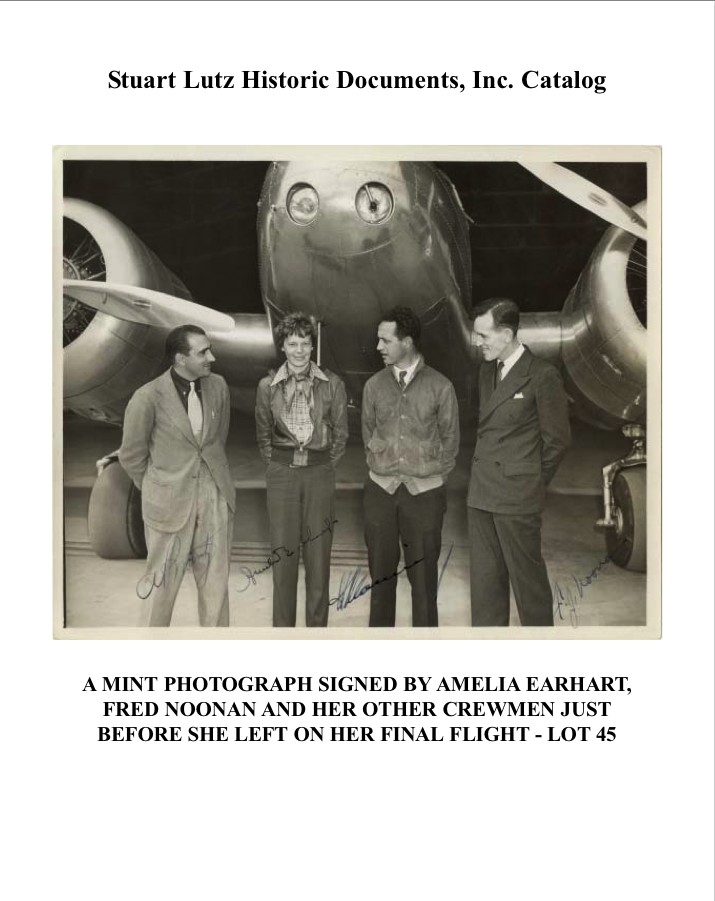 Stuart Lutz Historic Documents recently issued a new catalogue of autographs and signed documents. Most of the signers are people you know, either by name or station (such as signers of the Declaration of Independence whose names may be forgotten but whose role in America's history is not). However, there are also letters from ordinary people, notably, soldiers serving during the Civil War. Their stories are also important, even if in a different way from those of presidents. There are, naturally, plenty of presidents represented here, too. Now, for a few examples of what is available.

It has been 70 years since Amelia Earhart disappeared over the Pacific, yet people still search for her today. Undoubtedly they will continue until the mystery is finally solved. In 1937, she undertook to become the first woman to fly around the world. She came close. Having already flown from Oakland, California, to Lae, New Guinea, she and navigator Fred Noonan took off from Lae on July 2, 1937. Her destination was tiny Howland Island, from which she would continue to Hawaii and finally, back to Oakland. All seemed well, and radio contact was made with Howland, but they never arrived. While the most likely explanation is that they missed the target and eventually crashed into the sea, there has been much speculation, backed by supposed artifacts, that they made it to some other island, only to perish without being found. A massive woman-hunt was undertaken at the time, and searches continue to this day in the sea and on various islands. Still we wait. Item 45 is a remarkable photo. It is that of Earhart and Noonan, along with airplane racer Albert Paul Mantz and navigator Harry Manning, standing in front of her Lockheed Electra aircraft at Oakland Airport. The photograph is signed by all four. The date was March 17, 1937, the start of their first attempt. These four took off on their mission that day, but the plane developed troubles in Hawaii and had to be shipped back to Oakland for repair. On June 1, just Earhart and Noonan made their second attempt, this time quietly leaving Oakland and flying east instead of west. They almost made it all the way. The signed photograph (pictured on the cover) is priced at $11,500.

Item 35 is a signed Calvin Coolidge speech filled with irony. On November 11, 1928 (Armistice Day), President Coolidge spoke before the American Legion in Washington. This date recognized the tenth anniversary of peace, and all seemed well. The President notes that the nation has been bestowed with ten years of peace, and "It is our belief that it is coming to be more and more realized as the natural state of mankind." Of course, the war which ended ten years earlier was "the war to end all wars," and in 1928, it must have looked like that dream would be realized. Ten years hence, the world would be staring down the barrel of its second great conflagration. $2,500.

Some people leave their mark early on. In 1832, Samuel Francis Smith, a seminary student, wrote some lyrics to an old melody, He called it America, though it is often known by its opening line: My Country 'Tis of Thee. Smith was 23 at the time, and though he lived to be 87, nothing else he did ever had quite such a lasting effect. Smith did enjoy a long career as a Baptist clergyman and wrote many hymns. Item 125 is a copy of the lyrics to America handwritten by Smith, autographed and dated July 28, 1894. He was 86 years old at the time and yet it was these long ago lyrics that people still wanted to have. $2,250.