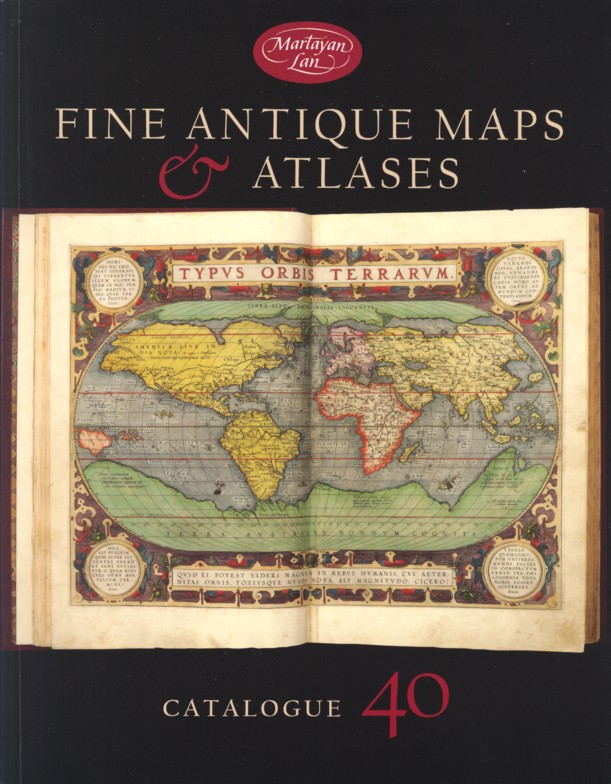 Martayan Lan has just issued their Catalogue 40 of Fine Antique Maps and Atlases. This is a collection of groundbreaking works, with almost as many "firsts" as maps. The catalogue begins with maps dating from as far back as the 15th century, depicting the world of Ptolemy, unchanged for 13 centuries. However, the world quickly expanded and came into focus over the next few centuries, with each succeeding map usually showing a bit more of that new world, brought home to Europe by the great explorers. This catalogue is a fantastic history lesson, each part being a fascinating new adventure as well as object of art. This is a collection of knowledge made beautiful. We can only touch the surface of what is available, but if you are interested in some of the finest and historically most important maps and atlases ever made, you will want to see this catalogue.

Where better to start than with what Martayan Lan describes as "the very first printed map." It was originally created by Bishop Isidore of Seville some nine centuries earlier, finally making it into print less than two decades after the invention of the press. It is a small map, 2 3/4" x 2 3/4" which appeared on a page in the 1472 book Etymologiae. It is about as rudimentary as a map can be. It is what is known as a "T-O" map. The shape is circular, with an outer circle representing the oceans, and an inner circle containing a "T." To the left and right of the vertical line of the "T" are Europe and Africa, to the top of the horizontal line is Asia. The vertical line (between Europe and Africa) is, naturally, the Mediterranean, while the horizontal is a more fanciful sea, likely consisting of a combination of waterways such as the Nile. You would have a hard time getting anywhere using this map as a guide, but its purpose was more likely to emphasize God's role in the world than to provide directions. The "T" is evidently symbolic of the cross. Item 1. Priced at $95,000.

Item 22 is another first, this time for Americana collectors. It is a second state of the first separate map of the Americas, from the 1545 edition of Sebastian Munster's Geographia. By this time, it was known that the Americas were separate from Asia, and the shape of South America is more or less familiar, but North America remained full of mystery. Florida and the Gulf Coast, as well as Cuba and Hispaniola are quite realistic, though the Yucatan is still shown as an island. However, the map incorporates a misinterpretation by Verrazano of waters inside the Carolina outer banks as being an inlet of the Pacific (the result being the continent is almost divided in half by an imaginary arm of the Pacific), and Japan is shown as an island just off a west coast located around the western border of Texas. $11,500.

Item 10 depicts perhaps the first map of Australia... or does it? This is the 1571 Montanus world map intended to show how the descendants of Noah spread across the globe. In the approximate location of Australia there is a large, triangular shaped landmass, pointed north. What makes this surprising is that, as best known today, this land had not yet been discovered by Europeans. This has led to speculation that there was a now lost earlier Portuguese exploration which first discovered this continent. Others have suggested this was a product of Montanus' imagination. My guess, looking at other aspects of the map, is that this was meant to be the tip of a huge Antarctic landmass then referred to as Terra Australis Incognita (which is otherwise unseen on this map), widely believed to exist at the time. See the map on the cover of this catalogue to view the enormous southern continent once believed to exist. $18,000.