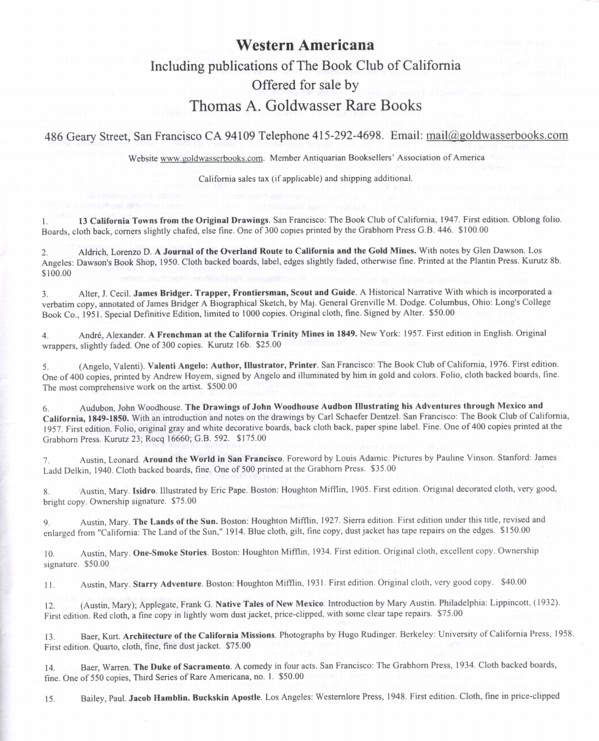 Thomas A. Goldwasser Rare Books has issued a catalogue of Western Americana, Including Publications of the Book Club of California. We might add it also contains many printings from the famed Grabhorn Press (some overlapping with Book Club publications) and other limited editions. However, this catalogue is hardly limited to such special editions. It contains many other works from California and the West, including a few very rare and highly valuable works. In all there are 441 books being offered, so there must be something for every collector of the American West. Here are but a few.

Item 6 is one of those Book Club of California items printed by the Grabhorn Press, in a limited edition of 400 copies. Published in 1957, the title is The Drawings of John Woodhouse Audubon Illustrating his Adventures through Mexico and California, 1849-1850. If that name sounds familiar, yet not quite right, John Woodhouse was the son of famed painter of birds John James Audubon. John Woodhouse devoted much of his adult life to assisting his father in his work, and after the latter died, to publishing later editions of his works. John Woodhouse was intimately involved in producing the reduced images of his father's birds used in the octavo editions of "Birds of America," and drew half of the illustrations in John James' "Quadrupeds of America." In between, John Woodhouse Audubon managed to do some of his own painting, and undertook a few travel adventures. One of those is depicted in this work, a difficult journey in which disease and bandits forced many of the participants, including the leader, to turn back. Audubon led those who remained through the rest of the journey. Priced at $175.

Item 411 is an even scarcer travel story: Reminiscences of California Life, by R.N. Willcox. Willcox was a carpenter who made his way to California during the Gold Rush and found work as a miner and by employing his trade. He writes about his experiences in California, and notably San Francisco. Among his topics are the mines, San Francisco vigilance committee, Indians, Chinese laborers, opium smoking, the Donner party and outlaws. Willcox privately published his memories in 1897 in Avery, Ohio. It appears that only 75-100 copies were printed. $750.

Stephen J. Field also published his California memories in 1880 "for a few friends," Personal Reminiscences of California. Field first traveled to California in 1849, where he became deeply involved in local politics. He became Chief Justice of the California Supreme Court though he was not beloved by all. Specifically, he had a dispute with former fellow California Justice David Terry years later as a result of a case involving that judge's wife. When confronted in a dining car, Field's bodyguard shot and killed Terry. In 1863, Field was appointed to the U.S. Supreme Court by Abraham Lincoln. Field developed a reputation as a defender of powerful business interests, as well as being a personally vindictive man, and unlike Lincoln, no great friend of African Americans. However, what he lacked in quality he made up in quantity, serving longer on the Supreme Court than any other judge -- 34 years in all. Nevertheless, his rare description of the early years of Gold Rush California is said to be one of the best. Item 130. $500.