The World's Most Important Maps from the Arader Galleries 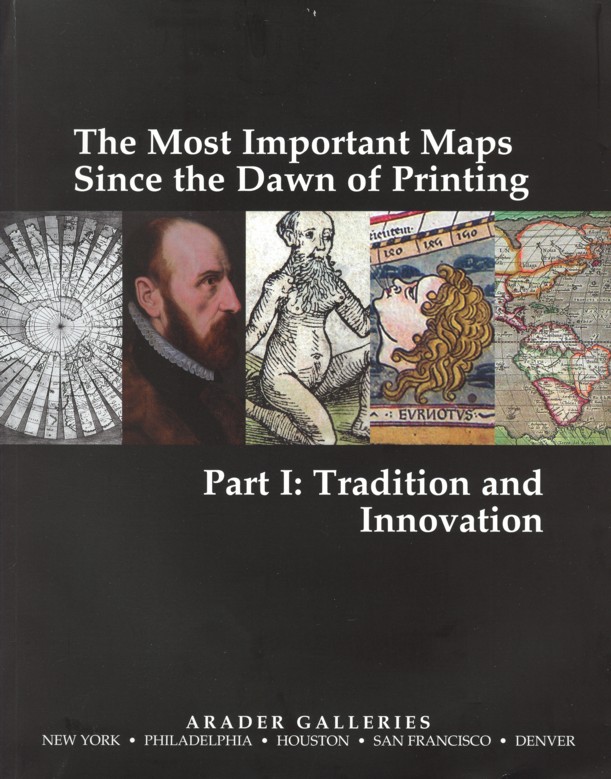 The World's Most Important Maps from the Arader Galleries

Here is a catalogue with a heady title to live up to: The Most Important Maps Since the Dawn of Printing. It comes from the Arader Galleries, and it certainly is a remarkable collection of the most significant maps and atlases of the past five and one-half centuries. This is a catalogue for those who collect at the highest level, but for those who do, it is a requirement. It is very unusual to find so many important maps in one location.

This is actually just the first volume in what promises to be a three-part set. This is Part I: Tradition and Innovation. It begins in the 15th century, literally the dawn of printing. Engraving made large-scale reproduction of maps possible, just as printing had done for the written word. From the limitation of hand-drawn maps and manuscript words, knowledge could be spread, perhaps not to a vast audience, but at least a wide audience of the wealthy and elite. Knowledge of the world became possible on a scale never before known.

Of course, there wasn't all that much to know at the end of the Middle Ages. The result is that the first decades of maps were based on Ptolemy's maps, well over a millennium old at the time. Knowledge had advanced little in the previous thirteen centuries. Fortunately, the development of printed maps and inquisitive explorers would soon result in updated maps covering lands previously unknown. Once Columbus completed his memorable voyage, those new lands would include territories now dear to the heart of ever American. Here are a few maps from Part I offered by the Arader Galleries.

Item 1 is a world map from 1478 from Conrad Sweynheym and Arnold Buckinck. It is from their edition of Ptolemy's Geographia. Sweynheym set up the first printing press in Italy in 1465 and was the first to use the new process of copper engraving to print maps. Arader describes this as, "In terms of accuracy, beauty and graceful engraving, it remained the finest printed Ptolemaic map for nearly one hundred years after its publication." The map uses a curved projection to display the Earth's spherical shape, though it covers only a small part of the world we know today -- Europe, eastern Asia, northern Africa. That's all there was in 1478. Priced at $95,000.

Item 2 is a slightly newer, spectacular, complete atlas, the first atlas printed in Germany. This is the 1482 Ulm edition of Ptolemy's Cosmographia. The edition includes 32 full-sheet woodcut maps, hand-colored throughout. It at one time belonged to Cardinal Emilio Altieri, aka Pope Clement X. He was a compromise candidate, selected in part because his age promised a brief papacy (he was 80 years old when selected in 1670, and despite ill health, lived to be 86). The Ulm edition was the first whose maps were made from woodcut blocks, and was the first to extend the boundaries of Ptolemy's world, even if only slightly. An extension above the world map's northern boundary adds Scandinavia. $1,800,000.