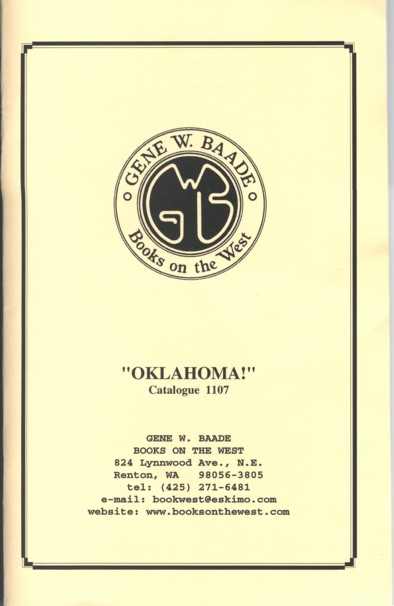 Gene W. Baade Books on the West has issued their most extensive catalogue yet: "Oklahoma!" No, this is not a Rogers and Hammerstein musical. Rather, it is a textual. Offered are over 400 items pertaining to the Sooner State, or Oklahoma Territory, or Indian Territory, depending on how far back you wish to go. Baade describes this printing as "...my most ambitious catalogue to date, and one close to my heart..." That may sound odd for a Washington State bookseller, but Baade is an Oklahoma native, having grown up on a farm in the "Cheokee Strip" (a strip of land along the state's northern border once belonging to the Cherokees). He notes that while not everyone may agree with an old broadside that "Oklahoma is the richest healthful section of North America," it indisputably "was a 'Country' that spawned a broad history and a rich literature." Here are some samples of that broad history and rich literature.

Oklahoma has had its share of colorful characters. Here is one. "Catch 'em Alive" "Jack" Abernathy must have been the greatest of all wolf hunters. His nickname explains what he did, but Abernathy didn't use traps. No, he caught 'em with his bare hands. Abernathy, who according to his friend Teddy Roosevelt, was just about the greatest horseman alive, would chase the critters relentlessly on his horse until they tired. He would then jump from the saddle, grab hold of the wolf's jaw, and wire his mouth shut. This story reached a disbelieving President Roosevelt, who traveled to Oklahoma in 1905 to see for himself, and participate in a wolf hunt with Jack. It was said that Roosevelt was the only man who could keep up in the saddle with Abernathy, but he couldn't catch wolves. Item 1 is Jack's story: In Camp with Theodore Roosevelt or the Life of John R. (Jack) Abernathy, published in 1933. Priced at $200. Item 2 is a revised version of his story, Catch 'Em Alive Jack, published in 1936, and inscribed by Abernathy. $275.

"Catch 'em Alive" wasn't the only famous member of the Abernathy family. In fact, his sons may have been even better known than he. Their story is recounted in The Remarkable Ride of the Abernathy Boys, by Robert B. Jackson, published in 1967. Louis, age 10, and Temple, age 6, presented their father with an unusual request in 1910. They said they would like to ride on horseback from Oklahoma to New York, by themselves, to greet former President Roosevelt on his return from an African safari. Evidently, Jack was a permissive father, because he said "yes." There was a lot of publicity as the boys rode east, attracting large crowds of well-wishers, even welcoming bands along the way, but it was still quite remarkable for kids of their age. However, it was not a first, as the boys had ridden alone from Oklahoma to Santa Fe the year before, when they were not yet quite so mature. They returned by car (evidently age requirements for driving an automobile were much lower then), "Temp" was said to be barely able to reach the pedals. Three years later, the boys were at it again, when they took on a $10,000 challenge to ride horseback from New York to San Francisco in 60 days. They lost, finishing in 62. Item 197. $45.