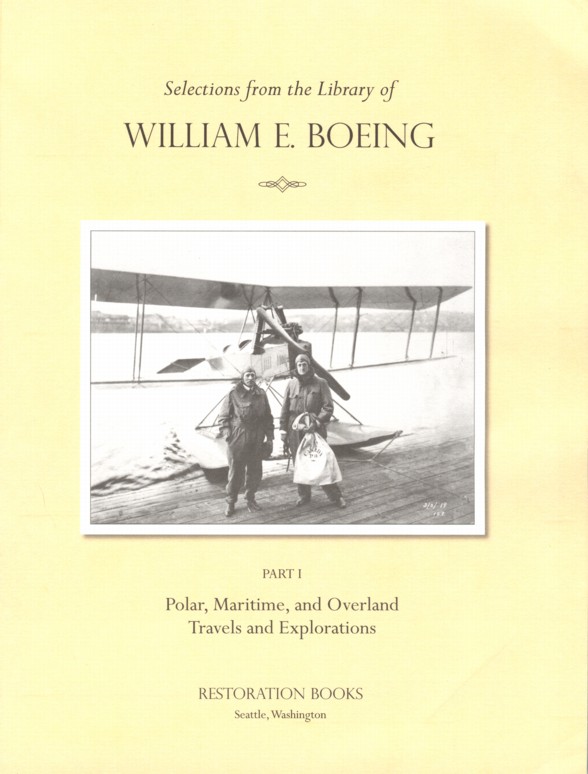 We recently received an exceptional catalogue of the library of an exceptional man: Selections from the Library of William E. Boeing. Even those not familiar with the man will instantly recognize his name, synonymous with air travel. Boeing actually began his career in the timber business, where his late father had built substantial wealth. This led him to move to Seattle and the Pacific Northwest, now home of his namesake company's airplane manufacturing facilities. It was there that he witnessed an air show in 1910, which generated his interest in aviation, and determination to improve upon the technology.

By 1915, Boeing was in the business of designing airplanes. This led to an early foray into carrying airmail, from which he would buy out other carriers, unifying operations under the name United Aircraft. This in turn led to passenger travel and parts manufacturing as well. However, following a scandal concerning mail routes in 1934, the government forced a separation of all manufacturers from airlines. United was broken into three companies, United Airlines, United Technologies, and Boeing Airplane. William Boeing was disgusted by the government's action and essentially retired from the aircraft industry, concentrating his energies on thoroughbred horses, ranching, traveling on his spacious yacht and, of course, his library. He died in 1956 aboard his yacht, just as it was returning to Seattle.

This half-inch thick catalogue has been prepared by Restoration Books of Boeing's hometown of Seattle. This is Part I of what will be two major catalogues: Polar, Maritime, and Overland Travels and Explorations. There is a notable number of travel books whose ultimate destination would be the American or Canadian Northwest. In addition to these primary catalogues, another 1,500 books from Boeing's library will be offered through topical lists. Finally, Restoration later plans to issue a listing of 200 Boeing library books in the field of aviation that were donated to The Museum of Flight in Seattle.

Boeing's library included a mix of notable and less consequential books. Restoration decided that rather than just publish one catalogue of his most important books, they would include both the rarest works and some of less significance, though still interesting in terms of their content. Here are a few from Part I.

One of the rarest and most significant Oregon Trail narratives is Journal of Travels Over the Rocky Mountains, to the Mouth of the Columbia River, Made During the Years 1845 and 1846... by Joel Palmer. It is the only contemporary account of settler travel in 1845, which doubled Oregon's white population (by adding 3,000 immigrants). Palmer's detail was so extensive that this book became a guide for travelers who set out on the trail. However, it may be this practical use of the book which explains why so few copies remain today. They were worn out. Boeing's copy is a first edition from 1847, possibly the second issue (it lacks the errata slip). It comes with a letter Boeing received from Chicago bookseller A.C. McClurg in 1915 saying, "It is undoubtedly the rarest book relating to Oregon..." McClurg's price was $90, probably enough to buy an airplane at the time. Currently priced at $5,700.