Books About Books and More from Oak Knoll 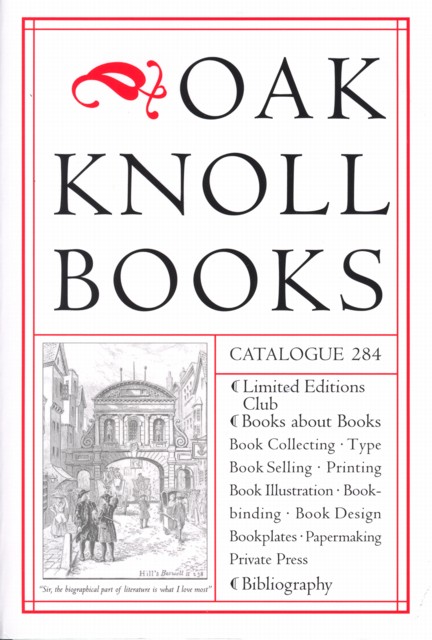 Books About Books and More from Oak Knoll

Oak Knoll Books has released its Catalogue 284, featuring works from the Limited Editions Club, books about books, and bibliography. Oak Knoll specializes in books that are about the art of making books, or books that are physically works of art. However, we do note some very interesting titles offered here that do not quite fit so neatly within these walls. That is more than acceptable as there are some most worthwhile historical works to be found here. So, let's take a look at this 284th catalogue in Oak Knoll's ongoing series.

Item 190 is one of the most significant books pertaining to the Colorado River: Report Upon the Colorado River of the West. Explored in 1857 and 1858 by Lieutenant Joseph C. Ives, Corps of Topographical Engineers... Ives conducted a pioneering survey of the great river, including the gathering of detailed botanical and zoological data as well as information on Indians who lived along the canyon walls. Ives led the first recorded expedition to the floor of the Grand Canyon. Along with text, this report includes many plates of geographic features and natives who lived by the river. Offered is number 90 of the copies issued to the House of Representatives, printed in 1861. Priced at $2,000.

Item 68 is a bound volume of several reports from Alaska. It includes maps, a copy of the penal code, and a report on agriculture (what grows in snow?). What makes the information particularly interesting is the timing of the material, the close of the 19th century when the Alaska gold rush was on. $225.

Jerome Kern is remembered by most as one of the greatest music writers for the theater. He composed such timeless melodies as Ol' Man River and Smoke Gets In Your Eyes. However, in the book world, he is remembered for a wonderful collection, and having the prescience to sell it at the most opportune time. Item 231 is the two-volume catalogue of The Library of Jerome Kern, published by the Anderson Galleries for his auction. There were 1482 lots, and they took in $1.7 million, a spectacular price in early 1929. Kern was amazed. What followed was even more surprising, though thoroughly unwelcome. This was the last great auction before the Depression. The days of spectacular prices came to a screeching halt with the market crash, but not until Kern had cashed out. As Oak Knoll points out, "some of the prices realized have not been seen again to this day." $225.