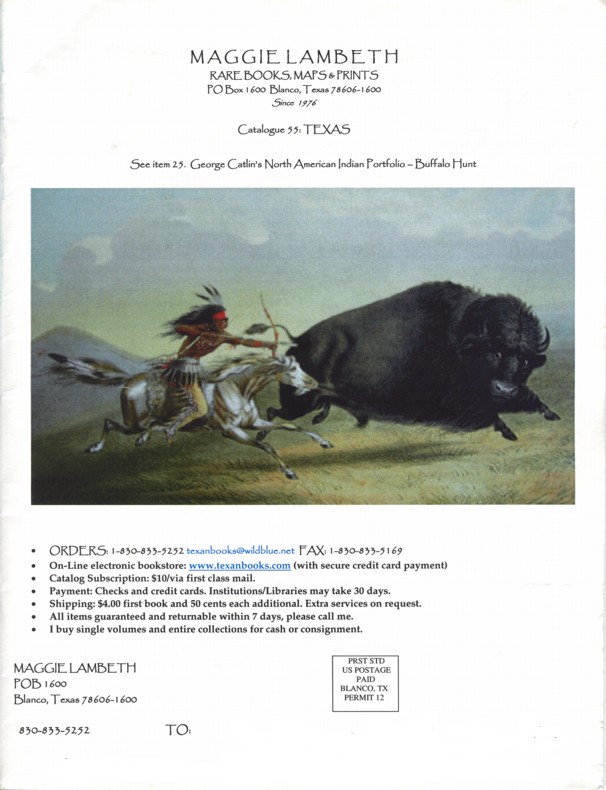 Maggie Lambeth Rare Books, Maps & Prints has issued a new collection -- Catalogue 55: TEXAS. That is "TEXAS" in all caps, but how else would you spell a land that is big as...well...Texas? Maggie Lambeth regularly supplies us with an extensive offering of works both informative and collectible pertaining to the history of the Lone Star State and its colorful inhabitants. I don't know whether natives of other states collect their homelands with quite the same passion as do Texans, but as long as oil flows, cattle roam, and guns shoot, there will be collectors looking inside the pages of catalogues such as those of Maggie Lambeth. Let's join them.

Item 219 is something of an autobiography from one of Texas' most notable outlaws, John Wesley Hardin. His father was a Methodist minister, therefore the "John Wesley" name. However, the son was no prince of peace. He had a violent temper, and a complete willingness to kill anyone who crossed him (reportedly he once killed a man in an adjoining hotel room just for snoring too loud). Hardin got in a serious knife fight with a schoolmate at age 14. At 15, he killed his first man. He would go on to kill perhaps another two or three dozen, maybe more. Some were lawmen, some competitors on the cattle trail where he worked for awhile. One lawman he came to know at the end of the cattle trail in Abilene, Kansas, was Wild Bill Hickok, but he got out of town ahead of the Marshall after one of his shooting incidents. Eventually, the heat got too intense, and Hardin left Texas for Alabama, but the Texas law retrieved him and sent him away. Hardin received a pardon in 1894 after 17 years in prison. He had studied law while incarcerated, so, ironically enough, he took up the practice of law in El Paso after his release. However, trouble seemed to find him, and a year later, Hardin lay dead, shot in the head by a sheriff with whom he quarreled. However, it was during this last year of his life that Hardin began writing his autobiography, and it was this document that was used to create the book: The Life of John Wesley Hardin, From The Original Manuscript, as Written By Himself. This is the first edition, published in 1896, a year after his death. Priced at $200.

Item 121 is a more recent book (2000) concerning a group of brave, contrarian German immigrants to Texas during the Civil War. Events in the 20th century tend to cloud the memory that many German immigrants who came to America were a most liberal, if not radical bunch. Many who settled the Texas Hill Country were Freethinkers, those who accepted no dogma that did not comport with scientific observation and knowledge. They were also fervently abolitionist, a principled but unpopular position in Texas. In 1862, Texas having joined the Confederacy, a group of German Texas Unionists attempted to flee to Mexico, in hopes of making their way to New Orleans to join Union forces. They never made it. They were massacred by Confederate soldiers along the banks of the Nueces River, their bodies left unburied. After the war, friends retrieved their bones and buried them near a monument built in honor of the Union and its Texas supporters at Comfort, Texas. The book is Death on the Nueces -- German Texans Treue der Union, signed by author Rodman Underwood. $35.