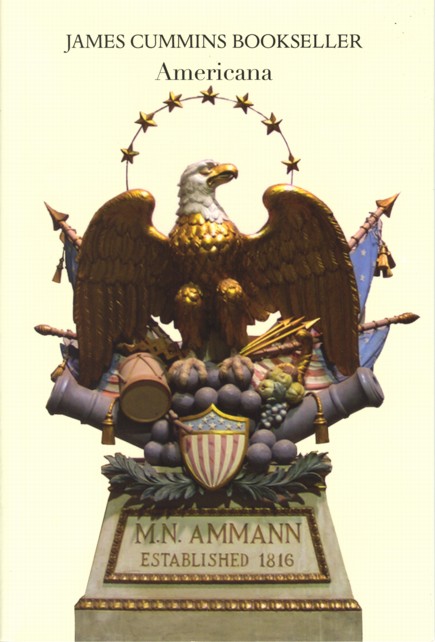 The latest catalogue from James Cummins Bookseller is one of Americana. It includes many books along with some manuscripts and ephemera. Items range from the Colonial period up to the Reagan administration, with much in between. All told, there are a few more than 100 pieces offered for sale, and it is all very collectible. Here are a few that may fit your collection.

Item 51 includes the first magazine printing of the most sung song in America, The Defence of Fort M'Henry. You don't know it? Today it is more commonly known as The Star Spangled Banner. It had previously been published only as a broadside or in a newspaper, not designed to last long. It first made it into the more permanent format of a magazine in the November 1814 issue of The Analectic Magazine. For those who wonder what on earth "analectic" means, no, it is not based on the apparent root. "Analectics" are condensed versions of articles, making this sort of a Readers Digest of its day. The editors published it with the express purpose of preserving Francis Scott Key's composition in a permanent form. That goal was certainly achieved. The poem was meant to be sung to the tune of the old British ditty Anacreon in Heaven. Key, a British prisoner, witnessed the bombardment of Baltimore during the War of 1812, and the Americans' successful defense of Fort McHenry. Priced at $1,750.

Item 56 is a rare manuscript account of one of the worst days in American history, that of the assassination of President Lincoln. Dr. George B. Todd was a surgeon on the U.S.S. Montauk, in the navy yard at the time. He reports that Lincoln had visited their ship that fateful day: "Yesterday about 3 P.M. the President and wife drove down to the navy yard and paid our ship a visit, going all over her, accompanied by us all. Both seemed very happy, and so expressed themselves, - glad that this war was over, or so near its end, and then drove back to the White House." Todd would pen this letter to his brother the following day, April 15, 1865. Cummins tells us this is one of but seven eyewitness accounts written within 24 hours of the assassination. Todd, like Lincoln, would go to Ford's Theater that night, where he had a seat near the President's box.

Todd goes on to say he arrived early so he could get that seat near the President. When Lincoln and his wife arrived, Todd reports they were cheered by all, and once the play began, he observed that the President "seemed to enjoy it very much." Around 10:25, Todd notes that a man came in and walked along their side of the theater. Someone said, "there's Booth," and Todd turned to look at him. He next observed Booth give a card to an usher, who took it to the President's box, and shortly thereafter, the door was opened and Booth allowed to enter. "No sooner had the door closed, than I heard the report of a pistol and on the instant, Booth jumped out of the box onto the stage, holding in his hand a large knife, and shouted so as to be heard all over the house -- 'Sic Semper Tyrannis' ('so always with tyrants') and fled behind the scenes. I attempted to get to the box but I could not and in an instant the cry was raised 'The President is Assassinated.'" Todd goes on to report that "some general" gave him a note to go to the nearest telegraph office to inform the nation, which he did, running as fast as he could. Based on this letter, Todd would have been the person to first inform the world of the tragic news. The letter includes an addition written on April 24, and Todd finally posted it to his brother on April 30. $65,000.