Legal History From The Lawbook Exchange 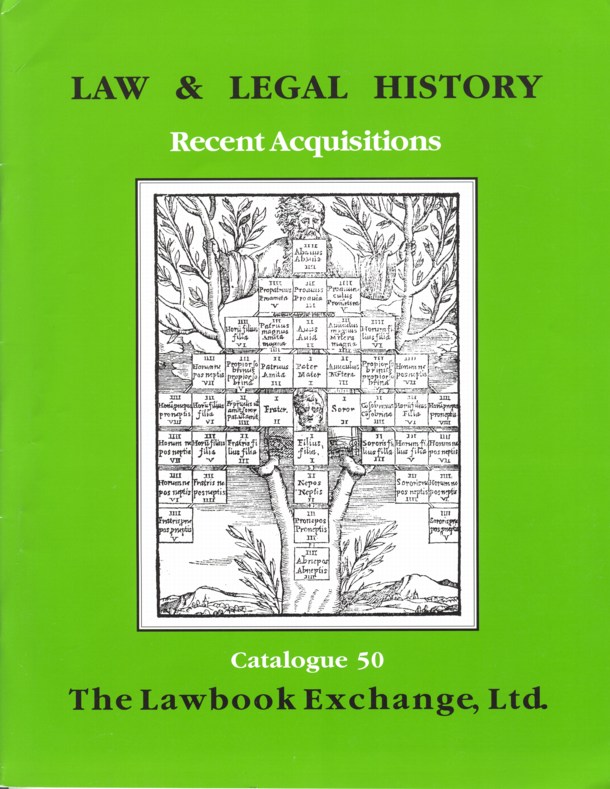 Legal History From The Lawbook Exchange

The Lawbook Exchange recently released the 50th catalogue of Recent Acquisitions. This presents a collection of predominately scholarly works, most antiquarian, a few recent. It is a catalogue which will appeal to those who collect in the field of law, or who are seeking to learn within the field, perhaps to trace legal concepts back to earlier days. This is a not a catalogue that will have mass appeal; it is targeted to a very specific audience. As they say, you know who you are, and you will appreciate these 146 new items. Here are a few.

One of the most notable of all American legal treatises was The Common Law, by Oliver Wendell Holmes, Jr. Published in 1881, Holmes countered the predominant notion that the law was based on some sort of science founded on abstract principles, but instead was a body of practical rules based on the particular situations encountered. In other words, the law was not discovered, it was invented. It is a debate that still rages today in such areas as constitutional law -- is it flexible or fixed for all time? Twenty-one years after this work was published, Holmes was appointed to the U.S. Supreme Court where he served for another thirty years. Item 72 is a first edition. Priced at $3,500.

Item 47 is the first American work on patents, An Essay on the Law of Patents for New Inventions, by Thomas Fessenden. This first edition was published in 1810, just twenty years after the first patent laws were passed, and several decades before the U.S. Patent Office was established. Author Fessenden was not only a lawyer, but a journalist, satirist, poet, publisher and inventor. He held two patents himself, for heating devices. $950.

Item 54 goes even further back in the history of law. Practicarum Observationum... is a 1586 fourth edition of a work originally published in 1578 concerning attachment and garnishment in the Holy Roman Empire. I wasn't aware they had mortgages back then, but evidently they did, and Andreas von Gaill, a German judge and legal scholar, provided this treatise. $850.

William Gloag came up with a unique way to teach law in 1920 with his Carmina Legis or Verses Illustrative of the Law of Scotland. Gloag figured students might be more interested in learning the law of Scotland if it were presented in verse rather than an ordinary textbook. Wrote Gloag, “It occurred to me that a student, sometimes weary of textbooks and lectures, might be interested in an attempt to illustrate the principles of the law of Scotland in metrical form..." He was most likely wrong, as to the best of my knowledge, this method of teaching has not been adopted by any law schools. Item 56. $95.