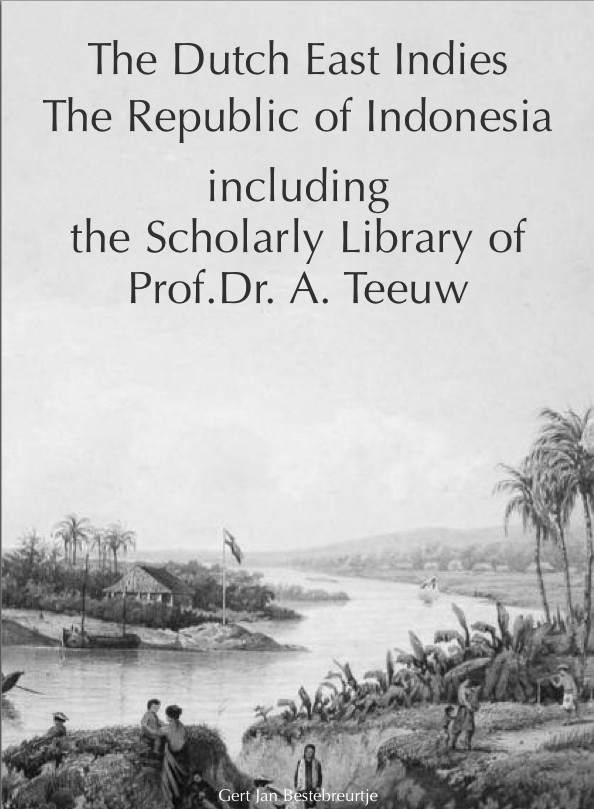 Gert Jan Bestebreurtje Rare Books has just issued a catalogue beyond anything I have seen in many years. Catalogue 132 is entitled The Dutch East Indies - The Republic of Indonesia including the Scholarly Library of Prof. Dr. A Teeuw. However, it is not the subject that makes this catalogue unusual. It is its size. One might not think the Dutch East Indies would be the subject for an enormous catalogue, but here it is – a catalogue with 2,311 items. Surely if you collect Indonesia, or its colonial predecessor, you will find what you want here. Just set aside enough time to look through all of the choices.

The predominant language among these works is Dutch, these being the Dutch East Indies, though there are many volumes in other languages. Item 1676 is a thorough look at the island of Java in the early 19th century written in English: The History of Java. Published in two volumes in London in 1817, author Thomas Stamford Raffles covered every aspect of life on Java – ethics, literature, poetry, music, drama, games of skill, hunting, religion, antiquities, the military, etc., as well as natural history. The work is also richly illustrated. The explanation for such a detailed work in English is that the British briefly occupied the territory from 1811-1815. €6,250 (US $8,827).

An American look at the East Indies was provided by Albert S. Bickmore in 1869: Travels in the East Indian Archipelago. Bickmore was an American natural history professor sent to the East Indies in 1865 by the Boston Society of Natural History. Along with the study of plants and animals, Bickmore provides descriptions of physical geography and the population. Item 330. €325 (US $456).

Item 1325 is a very old broadside pertaining to the Chinese massacre of 1740. There were two groups of Chinese immigrants at the time, a trading/entrepreneurial class who were of a higher status than the natives (though not as high as the Dutch) who worked with the Dutch East India Company, and a lower class of plantation laborers. When agricultural problems put many of the laborers out of work, the Dutch ordered them to be removed to Ceylon. However, the Chinese workers believed the real intention was to push them off the ships once out to sea and began to revolt.