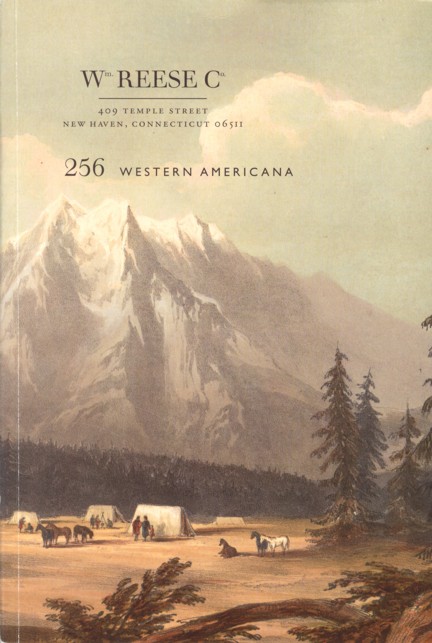 The William Reese Company has issued a new catalogue of Western Americana, number 256 in their long-running series. Offered are over 200 items pertaining to the very Old West. This is more the West of its earliest days, of explorers and surveyors, rather than gunfighters and lawmen (however, we do note that Buffalo Bill makes an appearance). There is no Jesse James, but there is Lewis and Clark, Francis Parkman, and Zebulon Pike. Of course there are Indians, but they are here as people about whom we wanted to learn more, not just as foils for cowboys. This is the West as it truly was, and Reese offers some of the most important and notable books from the era, along with some very rare and obscure works and personal manuscripts. Here are a few of them.

We will start with one of the earliest of western books, particularly about California. It is A Natural History of California by Miguel Venegas. This is the first English edition of a work that precedes statehood and the Gold Rush by almost a century. The first edition in Spanish preceded this 1759 translation by two years. This book is a good starting point for a California collection. Item 195. Priced at $4,500.

California and the American Southwest were still part of New Spain when Alexander von Humboldt visited the territory in the early 19th century. He had received permission from Spanish King Charles IV to explore the area, permission Spain rarely gave outsiders. His book, Essai Politique sur la Royaume de la Nouvelle-Espagne, along with the accompanying atlas describe and depict parts of the Southwest and Mexico in a time before Anglo settlement. Reese's 1811 octavo edition is a very rare, perhaps only existing copy with the suppressed dedication to Charles IV. The problem is that by the time Humboldt wrote his book, Charles IV had been overthrown by Napoleon. Dedicating a book to him, despite his cooperation with Humboldt, was definitely not politic. Some of the 1808 quarto edition copies were released with the dedication, but this is the first copy of the 1811 octavo Reese has seen which had one. Somehow it slipped through. Item 94. $45,000.

In the 1820s, the seeds that would transfer the Southwest from newly independent Mexico to the United States were being sown in Texas, but Mexican authorities were not yet wise to it. Item 8 is El Ciudadano Estevan F. Austin, Empresario, Para Intriducir Emigrados Estrangeros... When is the last time Stephen Austin was referred to as "Estevan?" This is an 1829 admission certificate to Austin's colony, and probably the earliest Texas imprint obtainable. A certificate was one of the steps required by Mexican authorities to emigrate to Austin's colony. This certificate was granted to a widow, Frances Manifee, and is signed by Austin's close associate, Samuel M. Williams. $25,000.