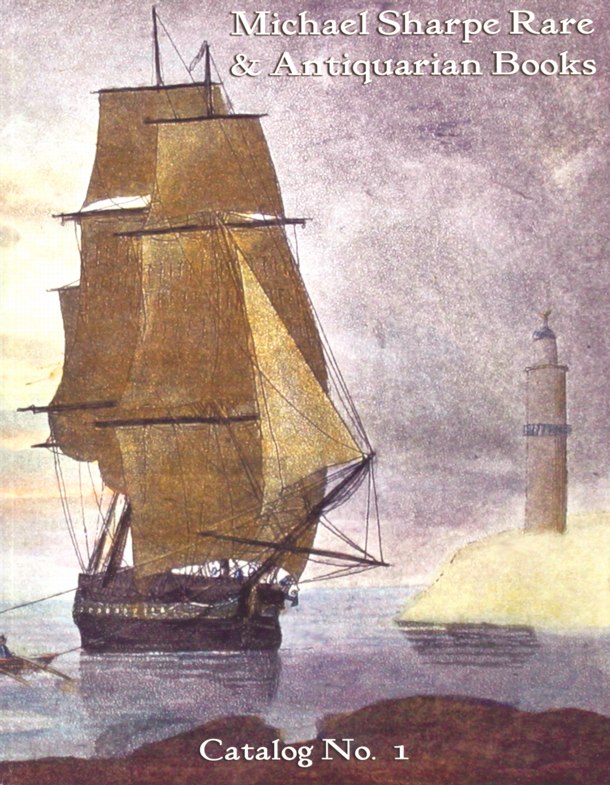 Just published this past month is the first catalogue (Catalog No. 1) from Michael Sharpe Rare and Antiquarian Books of Pasadena, California. The firm's founder is a California businessman and philanthropist as well as long-time book collector. Mr. Sharpe has brought in four veterans of Los Angeles' fabled Heritage Book Shop, whose owners recently elected to sell their valuable real estate and retire. Joining Sharpe are Nat Des Marais, Michael Garabedian, Kimberly Cummings, and J.P. Morgan (Sharpe notes, "what a fine name for a rare book shop employee!"). The result is a new shop with many decades of history and experience.

The first Sharpe catalogue covers a variety of subjects. They describe their collection as "comprising holdings in voyages and travel, science and natural history, literature, fine printing, Western Americana, and books from Printing and the Mind of Man." The consistent theme here is that these are exceptional books, the most valued and collectible of titles, and generally in fine or outstanding condition for their age. Mr. Sharpe is obviously a discerning collector and carries that eye over to the books being offered in the shop that bears his name. Here are a few examples.

We will start with the ultimate in rare and antiquarian books, at least in terms of being rare and antiquarian, though perhaps not what we typically describe as "books." Item 53 is a cuneiform tablet from Mesopotamia, almost 3,500 years old. This is a large Sumerian fragment of the Epic of Gilgamesh from the Middle Babylonian period, around 1400 BC. The Epic of Gilgamesh is one of the earliest known pieces of literature, it dating back to the third millennium BC. Gilgamesh was a Sumerian king, leader of the walled city of Uruk in what is today Iraq (government there operated more efficiently five millennia ago). It is not known whether he is a totally mythical figure or was a real king, though the latter is certainly a possibility. If so, however, his exploits were clearly exaggerated in the epic, as might be expected in a story not written until many centuries after its characters died. If Gilgamesh did exist, he likely ruled in the period 2700-2500 BC. And, even if Gilgamesh was not real, this tablet certainly is, and is likely to be the oldest piece of writing you will find available for purchase. Priced at $450,000.

Item 79 is the story of another great leader, though he lived some 4,500 years after Gilgamesh. This is The Life of George Washington, five volumes of the first editions, published from 1804-1807. It was written by John Marshall, the most important Supreme Court Chief Justice in American history, and a great admirer of the nation's first Chief Executive. Washington was also the subject of many myths, but such were unnecessary, his achievements as accounted by Marshall being quite real. $12,500.