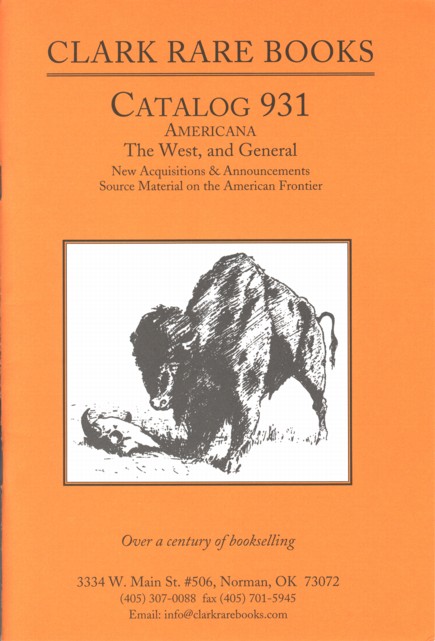 Clark Rare Books has issued a new catalogue of Americana, The West, and General. This is Clark's second catalogue since moving to Oklahoma, but number 931 in the bookseller's long history. This catalogue includes 244 items of mostly inexpensive material, some collectible, some items more for education and enjoyment. You will find explorers, cowboys, Indians, railroads, emigration, outlaws, prospectors...all of the usual cast of characters one would expect to find in the Old West. Of course there is General George Armstrong Custer, but his brother Tom is in here too. There are also once legendary Americans whose names have for the most part been lost to time, but are resurrected once more in the pages of this catalogue. Let's look inside.

Having noted that this material is not expensive, we will start with the exception to the rule. It is a piece worthy of being the exception -- a must classic for any collection of travels in the American West. Item 197 is a first edition of the Francis Parkman classic, The California and Oregon Trail, published in 1849. This travelogue on the Oregon Trail (Parkman did not reach Oregon or California, he stopped in present-day Wyoming) is one of the best descriptions of the trail and Indians along the way you will find, even if Parkman is a bit white-man-centric at times. Clark notes that this copy has all first edition points, but there are some binding differences that leads them to wonder if it might be one of the six prepublication copies publisher Putnam sent to Parkman for his personal use. Priced at $5,750.

It was California's second largest disaster of the 20th century, second only to the 1906 San Francisco earthquake. Item 115 is a thorough account of that tragedy: Man-Made Disaster: the story of St. Francis Dam, its place in Southern California's water system, its failure and the tragedy in the Santa Clara River Valley March 12 and 13, 1928, by Charles Outland. With water demand rising for the rapidly growing city of Los Angeles, the chief engineer for the city's water department, William Mulholland, set out to build a dam in San Francisquito Canyon, about 30 miles away. Construction began in 1924, and twice Mulholland changed plans to increase the height of the dam so it could hold more water. Through 1926 and 1927, as the water level was raised, cracks appeared in the dam, but Mulholland dismissed the small leaks as normal for a dam of this magnitude. The reservoir was finally filled on March 7, 1928, and more leaks appeared. On the morning of March 12, the dam keeper discovered a new leak and called Mulholland, who, after an inspection, again determined these were normal. However, shortly before midnight, the dam gave way, cascading some 12 billion gallons of water into the canyon below, a wall of water 125 feet high. Exact casualties will never be known, but at least 450 people, and possibly over 600, died in that wall of water. Later examination showed the land on which the dam was built was too unstable, and construction may have been short of accepted standards even for that time. Mulholland took full responsibility, commenting that he envied those who died. Offered is a 2002 second printing of the 1977 revised edition of Outland's work. $75.