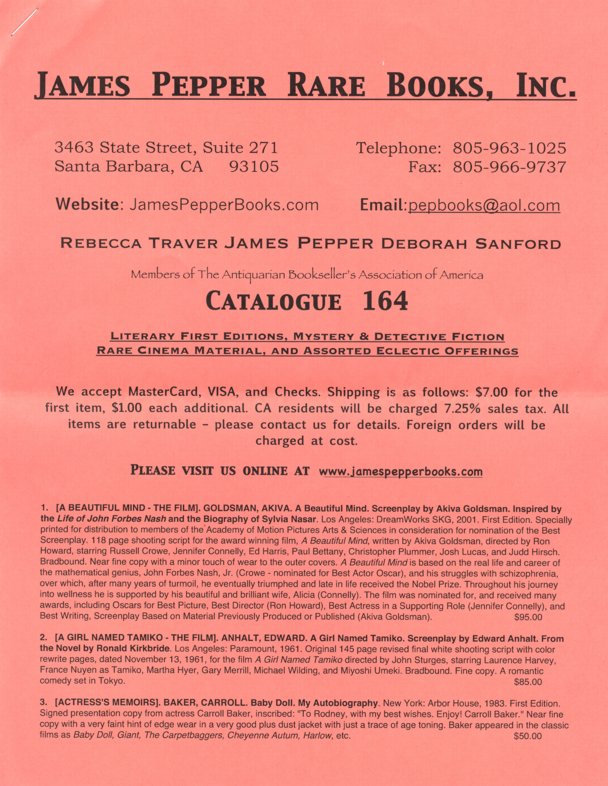 Catalogue 164 from James Pepper Rare Books is described as a collection of "literary first editions, mystery and detective fiction, rare cinema material, and assorted eclectic offerings." That says it all, except that not all items are books. From the field of film there are scripts, plus signed photographs of well-known actors and actresses. From literature there are first editions of important books, some of which are signed. As for eclectic, how about a check signed by Edgar Rice Burroughs? Tarzan may have lived free in the trees and picked bananas, but Burroughs had to pay for things the same as the rest of us. Or how about a book written by early western film star William S. Hart's horse? Actually, this is an "as told to" book written down by Mr. Hart. Perhaps this horse was Mr. Ed's grandfather. The inscription comes from "the Little Pinto Hoss and his Cruel Master. Bill Hart." Here are some more items you will find in this catalogue.

Item 35 is a most fascinating biography and very rare one at that. The title is Charlie Chaplin's Own Story -- Being the Faithful Recital of a Romantic Career, Beginning with Early Recollections of Boy-Hood in London and Closing with the Signing of His Latest Motion Picture Contract. The book was published in 1916, just two years after Chaplin had burst on the scene. He was already very popular by the time, though his greatest work still lay years ahead. The author was Rose Wilder Lane, daughter of "Little House" novelist Laura Ingalls Wilder. Some say Lane ghostwrote her mother's books (she was, at times, a ghostwriter); others say her mother wrote hers. Perhaps each wrote her own. Chaplin had consented to a series of interviews by Lane in 1915. Just recently a star, much of the book is focused on Chaplin's earlier, difficult days growing up in London. Lane's style was to be dramatic, exaggerating, perhaps fictional in her writing. Her interviews were published serially in the San Francisco Bulletin, but when she attempted to publish them in book form, Chaplin put his foot down. The book was supposedly written by him, with a thanks to Wilder for "editorial assistance," the reverse of what was actually the case. It was replete with dialogue from Chaplin's early life no one could possibly remember. Chaplin threatened legal action, publisher Bobbs-Merrill agreed to withdraw the book (despite Lane's plea to Chaplin), and most copies were destroyed. The result is it is quite rare today. This copy includes a card with an early signature of Chaplin, though obviously he did not sign the book itself. Priced at $5,500.

Here is a very odd item for collectors of the old Confederacy: The Robert E. Lee Family Cooking and Housekeeping Book. I'm not sure how much of the cooking and housekeeping the Lee family did themselves in the old days, but the Confederate military commander's wife, Mary Anna Custis Lee, kept a notebook of such household information. In 1997, the Lees' great-granddaughter, Anne Carter Zimmer, published a book based on Mrs. Lee's notebook. This copy is inscribed by Ms. Zimmer. Item 83. $150.