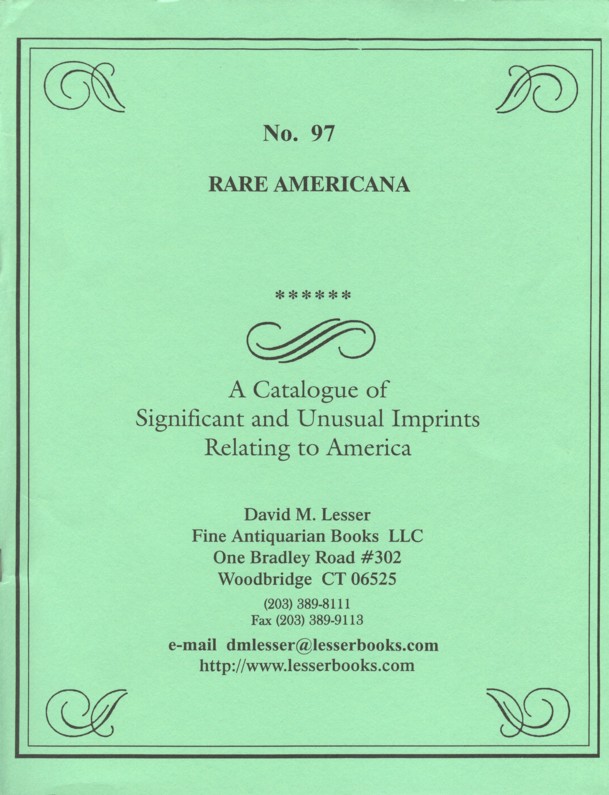 David M. Lesser Fine Antiquarian Books offers a regular flow of Rare Americana. Catalogue 97 fits right in with this series, offering more rare and unusual items within the field, primarily but not exclusively from the period from the Revolution to Reconstruction. Lesser's catalogues are always informative and entertaining, a source of knowledge as well as material. His thorough descriptions, including placing each document in its historical perspective, make each of these catalogues a lesson in American history. Here are a few of the items offered in Catalogue 97.

One of the most important (and expensive) of Indian books is the "History of the Indian Tribes of North America," by Thomas McKenney and James Hall. McKenney was the first Director of Indian Affairs, and after he was dismissed from the position by President Andrew Jackson in 1830, he journeyed into the West to obtain and preserve as much information about the Indians as he could. For those who cannot afford the six figures required to purchase that work, here is a more reasonably priced item from McKenney. It is Documents and Proceedings Relating to the Formation and Progress of a Board in the City of New York, for the Emigration, Preservation, and Improvement, of the Aborigines of America. July 22, 1829. Interestingly, McKenney, who was deeply concerned about the welfare of the Indians, promotes a program similar to one favored by Jackson, much less their friend. Both favored resettlement of eastern tribes in the west, ostensibly to protect them from whites (McKenney is a bit more believable as Jackson had the power and legal authority to protect eastern Indians and refused to do so). In this pamphlet, McKenney urges relocating the eastern tribes, as "without this change, the Indians must perish." He goes on to note that beyond the Mississippi River, President Jackson "has provided a country large enough for all of you. There your white brothers will not trouble you; they will have no claim to the land, and you can live upon it..." Of course, that promise lasted only until white settlers decided they wanted the land west of the Mississippi as well. Item 92. Priced at $275.

Item 66 is a broadside poem, perhaps circa 1850s, a piece of Irish ethnic "humor" called The Street Sweeper's Dream. It is supposed to be the dream of a street sweeper, one of those people who swept up after horses (the pre-auto form of transportation was even more polluting than the car). In his Irish dialect, the sweeper proclaims how he likes his job, for which he is supposedly paid well, but at night, " I hov such terrible dhreams." What are those dreams? Here we go: "There's harseshit in the wather-pail, and harsehit in the sink, / Harseshit in uvree bite I ate, an' uvree thing I dhrink." This classic piece of harseshit is yours for $500.