Items for the London Fair from the Antiquariatt Forum 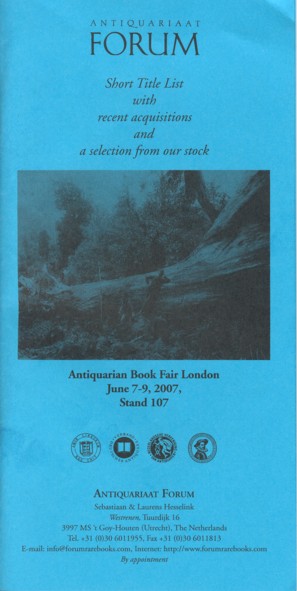 Items for the London Fair from the Antiquariatt Forum

We are a bit late here, but we recently received the latest Short Title List from the Antiquariatt Forum. Perhaps because it is from a Dutch bookseller, printed for the Antiquarian Book Fair in London, this explains why we were a month behind the times in receiving it. We are, after all, located in the New World. Offered is a mix of books ranging from old to very old, including travels, medicine, science, poetry, art, religion, satire, and more. There is a greater concentration of English works than usual for the Dutch bookseller, as befitting a display presented in London. Here are a few of these works.

Item 9 is one of the great English adventures, worthy of fiction but true nonetheless. It is A Narrative of the Mutiny on board His majesty's Ship Bounty. This is the first edition of the account of this famous mutiny written by Captain Bligh himself. Bligh was transporting breadfruit trees from Tahiti to the Caribbean when part of his crew mutinied, perhaps finding life on Tahiti preferable to Bligh's stern discipline. Whatever the reason, Bligh and his loyal sailors were placed on a dinghy, where the Captain managed one of the most spectacular nautical feats imaginable. He brought his boat across 3,500 miles of sea to rescue without losing a man. William Bligh then went on to serve several more decades in the Navy. Priced at £8,350 (or approximate US equivalent of $16,830).

Item 45 is a very rare and important piece of Americana. It is a first edition copy of the Kanagawa Treaty, or Treaty Between the United States of America and the Empire of Japan. Concluded March 31, 1854. It was printed in 1855 and bears a printed signature of President Franklin Pierce. This was the treaty that forced Japan to open its doors to the world after centuries of total isolation. It was Commodore Matthew Perry who sailed to Japan and quite literally refused to take "no" for an answer. The treaty allowed for a certain amount of trade, the protection of shipwrecked American sailors, and the establishment of a consul. Why copies of this treaty are so rare is unclear, but the Antiquariatt Forum notes that they can locate only one other copy of this first edition. £32,580 (US $65,655).

Trips to the Holy Land entail a certain amount of risk today, but nothing like in the 16th century. Voiage de la saincte cite de Hierusalem recounts Hungarian Batholomeus Georgiewitz trip to Jerusalem almost five centuries ago. Published in 1600, it not only describes his pilgrimage from Paris, but the twenty years he was waylaid in Turkey as a prisoner and slave. Item 37. £12,680 (US $25,553).

If Georgiewitz felt ill on his trip, he could have consulted this book -- The Boock of Physicke, by Oswald Gabelchover. This medical text was quite popular in Germany, going through many editions over many decades, but this 1599 edition was the first and only one in English. It is probably a bit too dated to justify a second edition now. Item 31. £17,450 (US $35,149).

Now for some lighter fare. Item 63 is Les Chats ("The Cats") by Francois Paradis de Moncrif. This 1727 first edition is one of the earliest books devoted entirely to cats. It is written in an overly serious and pedantic style to achieve its aim of humor. After the "serious" part, it adds some letters between cats, a letter from a cat to a dog, and the like. £3,280 (US $6,603).