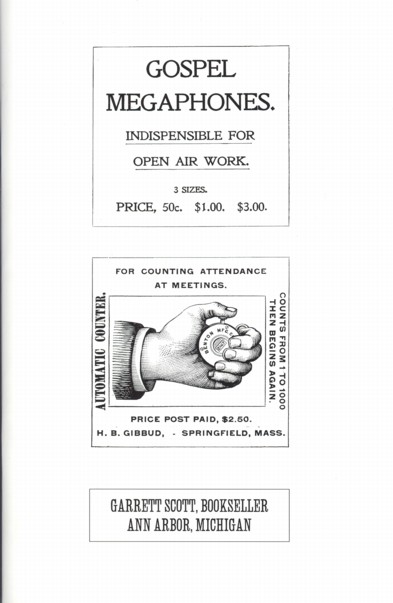 A new collection of odd and eccentric works was recently released by Garrett Scott, Bookseller, a specialist in the unusual. This one is entitled, American Itinerant Ministers, Evangelists & Missionaries, including Conversion Narratives and Controversial Works (With an additional section of material relating to American Spiritualism). That title might seem long, but not by 19th century standards. While not wanting to sound impious, Scott notes that many of these items are similar to circus and other popular entertainment works he has handled in the past. He also notes that some writers stated later edition numbers in their books, evidently attempting to make them appear more in demand, "a demand I hope to reproduce...with this offering." With the clarification that some of these are actually more serious theological works, we will mention, as samples, some of those that are among the more entertaining.

Bertha-Charlotta Doering must have been a heavenly princess, based on the title of her book -- The Romance of a Heavenly Princess as Told by Herself. This item was published by the Trust in God Publishing House of Los Angeles in 1921. The Swedish- born evangelist made her way to Arizona, and while she forgave worldly possessions, she had "millions and millions to my credit in the heavenly Bank." However, she did fear her financial genius would lead others to believe she had "crack-brain" or "loose screw." This was a very reasonable fear. Item 27. $50.

Another personal account is given in the Autobiography of Elder Perrilla Dotson, National Evangelist of the Church of God in Christ, circa 1954. Elder Dotson recalls, "In 1954, I was operated on for a hernia and I was almost cut from side to side, and I had to have my waist line removed." How does one remove a waistline? I guess with God, all things are possible. Despite this rather horrendous sounding surgery, Ms. Dotson assures us that she has been truly blessed. Item 29. $45.

Wadsworth Tuck wrote his Interwoven: Letters from a Son to his Mother under the most unusual of circumstances. He was dead. A spirit medium helpfully intervened to pass these messages back to Mom. Tuck is able to assure his mother of the obvious, that there is life after death, and lets her know that "Father has a white gypsum house building for you, and ornamented with pink gems." Now you know there is gypsum in heaven, so having some expertise in working with this material is a useful skill you can take with you. Item 126, published in 1905. $45.

Item 112 is a startling, though overlooked, religious tract: Truth is a Beacon Light to Heaven...As Intuitively Received and Written by William Brown, of Buffalo, (A Sailor). Brown informs us, "Now God shows me that I am the very one that Jesus of Nazareth prophesized of, and Jesus of Nazareth tells me that I am the very one that he prayed for." What Jesus was doing in Buffalo in 1863 is unclear, but perhaps he wanted to see snow after the heat and deserts of Nazareth. This book is protected by the "Copy-Right Secured by a Progressive Act of God and Nature, and recorded on Nature's Great Eternal, Universal Page of Progression." Reprint this one at your own peril. $125.