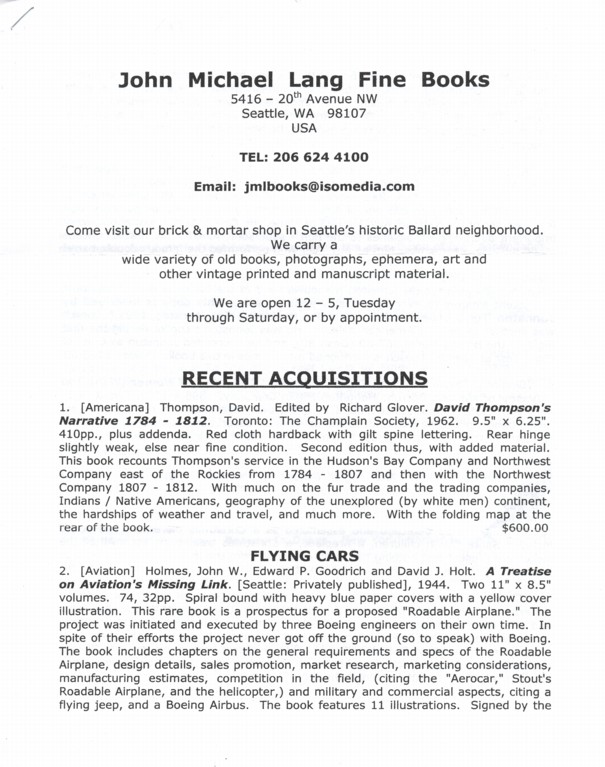 John Michael Lang Fine Books has issued a catalogue of 25 new Recent Acquisitions. It offers a mixed bag of unexpected material, with no discernable theme beyond their recent acquisition-ness. Lang manages to come with some unusual items, so these catalogues are always worth a look. Here are some examples of what we found this time.

Here is an item appropriate for any aviation or automobile collection that you almost certainly do not have. It is a spiral bound report from 1944 by three Boeing Corporation engineers on the feasibility of developing a flying car. I kid you not. Can you imagine an air traffic controller's job if they had to deal with millions of these too? This privately published item is entitled A Treatise on Aviation's Missing Link, and its engineer-authors were John Holmes, Edward Goodrich, and David Holt. The project was apparently initiated by the engineers themselves on their own time, which may mean that Boeing didn't give them enough to do. The book includes specs on the "Roadable Airplane," designs, promotional materials, marketing considerations, manufacturing costs, and competition (which included the "Aerocar," flying Jeep, and helicopter). As Lang notes, "the project never got off the ground (so to speak)." Other than a copy in the Boeing archives, Lang has been unable to locate any other copies. Item 2. Priced at $2,000.

Item 18 is the ironically titled The Unpublishable Memoir, by A.S.W. Rosenbach, un-published in 1917. This is a series of short "bibliomysteries," written by "The Doctor," as Rosenbach was known. Dr. Abraham Rosenbach was a Philadelphia bookseller who sold the greatest material to the greatest book collectors of the first half of the 20th century. This copy is inscribed to Michael Monahan, a writer, poet, and editor of The Papyrus. Lang describes Rosenbach as "the greatest bookseller of all." Who are we to argue with this assessment? $150.

Item 13 is the oldest book in this collection, and one of the older ones you will find. It is Satyrarum Hecatostichon, by Francisci Filelfo (Philelfi). This is a group of 15th century Italian satires published in Milan. This first edition was published by Christopher (Christophoro) Valdarfer in 1476, barely two decades after the invention of the printing press. It was another Valdarfer printing, of Boccaccio's Decameron, which brought a record price at auction in 1812 at the Duke of Roxburghe's dispersal sale (the record stood for several decades). The famed Roxburghe Club was formed after that sale, and a toast was raised to Valdarfer at the time. This Valdarfer comes at a much more manageable price. $7,500.