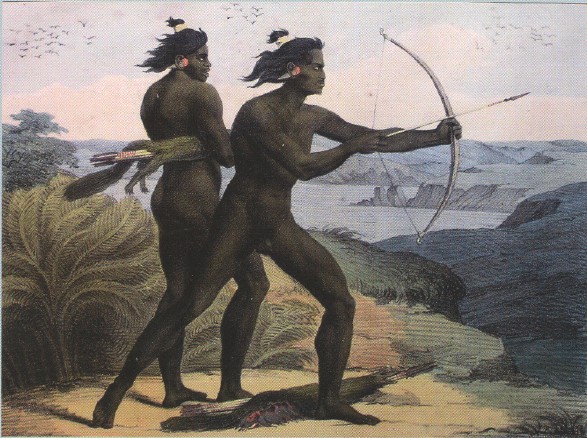 
For a look at San Francisco before there was a San Francisco as we know it, Arader offers two hand-colored lithographs by Louis Choris from Voyage Pittoresque Autour du Monde...published in 1822. One shows three Indians in a boat near an uninhabited shore; the other two Indians with a bow and arrow about to shoot something from a hilltop overlooking a deserted bay. It is a sight you will never see! $9,500 and $12,500.

If this isn't early enough, there is a sea chart by Sir Robert Dudley, Carta particolare dello stretta di Iezo fra l'America e l'Isola Iezo, printed in 1661. Dudley was an Englishman who produced his work in Italy. The chart depicts the coastline from Oregon to just north of San Francisco Bay. He apparently used place-names from an earlier Hondius globe. $4,800.

The Golden Gate -- San Francisco is a late 19th century watercolor by Robery Harvey. It depicts an island in the bay, the one we better know as Alcatraz. Even then, there was a small fort and a few prisoners were housed there at various times. However, it would not be until the 20th century that the large federal prison would be built upon the island. At this time, its primary use was to hold a lighthouse. $8,500.

The Aradewr Galleries in San Francisco may be reached at 415-788-5115 or online at www.aradersf.com.