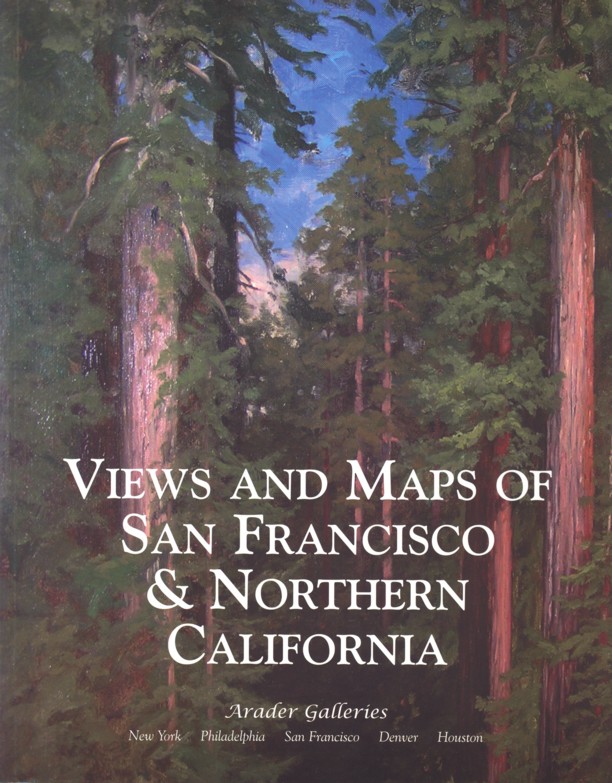 The Arader Galleries has issued a catalogue of Views and Maps of San Francisco and Northern California. It includes both printed and painted views, maps, and those items that are somewhere in between -- the bird's-eye view. These are definitely pieces meant to be mounted on the wall, not placed on a bookshelf. The Arader Galleries has five locations coast to coast, though it is not hard to recognize that these are featured by the San Francisco gallery. For those with a connection to this region, or a simple love for beauty, there is something here you will enjoy. Let's take a look.

Here is one of those bird's-eye views: Official Bird's-Eye View of the California Midwinter International Exposition -- San Francisco California. The exposition was held in Golden Gate Park in 1894. Thirty-eight nations, along with six states and territories and numerous California counties participated. The timing (midwinter) was designed to display California's pleasant climate. Daily reenactments of the Gold Rush days were performed. California's wine country and agriculture were featured, including a knight and horse made from prunes. I will refrain from any jokes here because they are too obvious. Arader notes that many of the structures still exist, though the most notable at the time was “Bonet's Tower." This was something of a play on the recently constructed Eiffel Tower, about one-third its size, but highlighted with a spectacular lighting featuring the latest invention, the light bulb. This is a chromolithograph by Charles Graham, who had been the official artist for the famed Columbian Exposition in Chicago the previous year. Priced at $15,000.

If you ask most people what is the best-known event ever to take place in San Francisco, they will probably name the earthquake of 1906. Some 3,000 people are believed to have died during the disaster and most of the city's residents were forced to flee. As bad as the earthquake itself was, the fires that came later were even worse. Broken gas mains started the fires, while broken water lines prevented the fire department from being able to put them out. The city resorted to blowing up blocks of buildings in an attempt to establish a firebreak. Still, it took four days before the blaze was finally brought under control. Offered is a 1906 chromolithograph by Francis Ficke, Destruction of San Francisco by Earthquake and Fire, April 18th, 1906. This view overlooking the city from nearby hills shows the fires raging out of control in the heart of town. $9,500.

For a map of San Francisco at this time, there is The Rand McNally Vest Pocket Map of San Francisco published in 1906. This shows one of the few features that were largely unchanged by the disaster. The streets weren't affected by the earthquake and fire, though so many of the structures along them disappeared. $5,800.