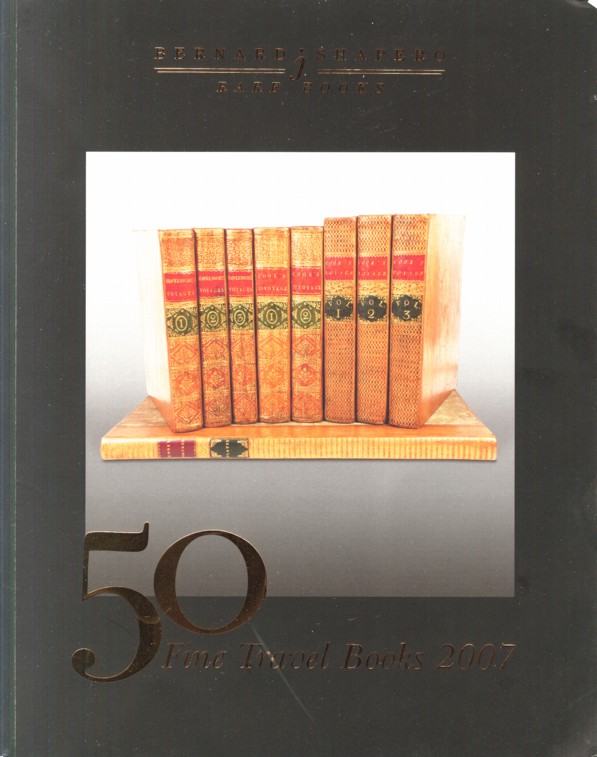 The latest in the series of "50 Fine Books" from Bernard J. Shapero Rare Books has arrived. This one is entitled 50 Fine Travel Books. These are certainly fine books, sure to stir the wanderlust in you. They hark back to a day when travel was a bit more challenging, and far away places a lot less familiar. There is much excitement to be relived within these pages, but treat them gently. These are all among the most collectible of books, to be treated with the care they deserve. Here's a look at a few of these fine travel books.

We will start with one of the most collectible works of Americana. Item 41 is Caius Julius Solinus' Ioannis Camertis... the edition from 1520, that is. Solinus actually wrote his work over a century earlier. As usual, this copy is bound with Libri de situ orbis tres by an even older, old-timer, Pomponius Mela, who lived in the first century. These works of natural history were based on even earlier works, and though very old at the time of this printing, still contained much of the "latest" information available at the dawn of the age of exploration. However, it is not the text that makes the Solinus so important. It is the much newer map within. Inside is the earliest obtainable map which labeled the New World with the name "America." Indeed, for a long time, it was believed that the Peter Apian map within was the first to use the name "America." It was not until the discovery of a 1507 Waldseemuller map (which exists in but one copy at the Library of Congress) that it was realized that Apian had "borrowed" his map from an earlier source. "America" is placed squarely on South America, which looks like a full-fledged continent, while North America appears more like a long (north to south) island. Priced at £65,000 (or approximate US equivalent of $131,063).

Item 1 is the first book edition (following the serially issued installments) of the first successful journey to the coldest place on Earth, the South Pole. Perhaps Roald Amundsen had an advantage over most polar explorers, having come from Norway, a quite cold place itself during winter. Amundsen not only beat his rival Robert Scott to the Pole, but returned alive to tell of it. His book, in the original Norwegian, is Den norske sydpolsfoerd med Fram 1910-1912. Those who do not speak Norwegian will be pleased to know it contains many photographs. Amundsen reached the South Pole on December 14, 1911, during the polar "summer," when temperatures average a balmy 20 below zero Fahrenheit. This copy is inscribed by Amundsen, in Norweigian, "Goggo from uncle Roald. 24.12.14." £6,000 (US $12,098).

Winston Churchill is best remembered for leading Britain through perhaps its greatest trial, the Second World War. However, Churchill was also a prolific writer and great historian. Four decades before leading Britain through the Great War, he was a combination combatant and newsman in the Sudan, when his nation was fighting local tribes. In 1899, Churchill published a two-volume account of this not-so great war, The River War. Item 8. £3,500 (US $7,058).