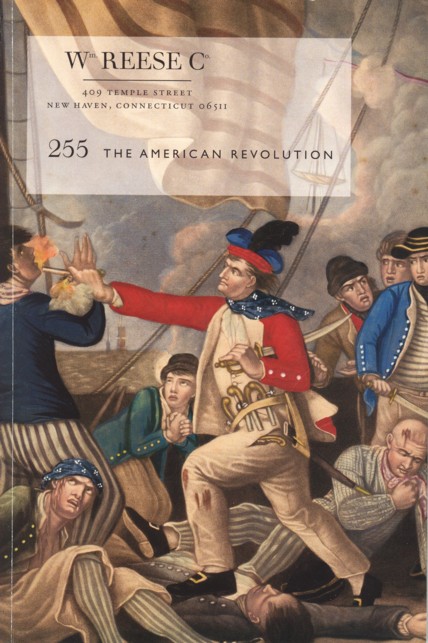 The redcoats are coming! The William Reese Company takes us back to the beginning of the United States in their 255th catalogue, The American Revolution. Offered is a collection of books, pamphlets, broadsides, manuscripts, and artwork (but no photographs) from America's revolutionary era. Items generally run to the troubled days of the late colonial period, late 1760s-early 1770s, to the period shortly after the peace was concluded, in the mid 1780s. This is not easy material to find any more, but Reese has managed to come up with over 200 significant and intriguing items for your consideration. So let the revolution begin.

We will start with the item pictured on the cover. This is a mezzotint of Paul Jones Shooting a Sailor Who Had Attempted to Strike His Colours in an Engagement. This 1779 biting English satire of America's first naval hero, John Paul Jones, is inaccurate, but does display the intensity of British dislike of Jones. The image shows Jones, dressed in an odd costume and funny hat, charging over the bodies of dead and wounded sailors to shoot his chief gunner in the head. Other sailors look on in horror. This is a fantasy based on Jones knocking down a shell-shocked gunner with the butt of his gun when the man repeatedly called for "colours" (surrender). Instead, Jones responded with his famous "I have not yet begun to fight" (or words to that effect). John Paul Jones was a master at harassing the British at sea, leading him to be regarded as a hero in America, but a pirate in Britain. Item 38. $17,500.

Some folks in Boston were already celebrating victory over the British before even the Declaration of Independence was signed. Item 11 is Two favorite Songs, Made on the Evacuation of the Town of Boston, by the British Troops, on the 17th of March, 1776. It celebrates the siege of Boston, where patriots under George Washington chased the British from the city. The other song celebrates the Battle of Bunker Hill. It was an auspicious start for the patriots, who would know more difficult times in the days ahead. "It wasn't our will that Bunker-Hill, / From us should e'er be taken..." Reese notes that the woodcut of Boston is the same as one used to depict the siege of Louisbourg (Nova Scotia) on a 1745 broadside. Item 11. $17,500.

Now for the other side. Episcopalian Minister Samuel Seabury was a most loyal loyalist and vociferous critic of the Revolution. In a series of pamphlets, he attacked the Continental Congress and all who questioned Britain's authority. Item 182 is the second of his pamphlets, The Congress Canvassed... a 1774 attack on the Continental Congress published anonymously under the name "A.W. Farmer" (a Westchester Farmer). At the end, he promises to reply to Alexander Hamilton, who had responded to an earlier Seabury pamphlet. Seabury says he is "neither frightened nor disconcerted by it." This marked the start of a pamphlet war between the two, which only served to establish the reputation of Hamilton, still in his teens at the time. Item 182. $3,250. Three other Seabury pamphlets are also offered.