Books About Books, with History and Travel, from Oak Knoll 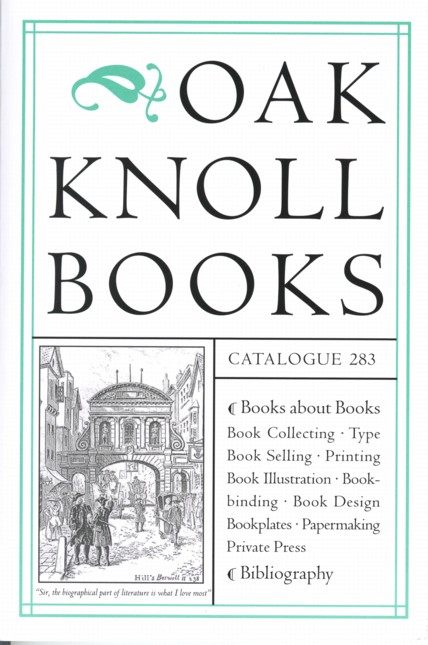 Books About Books, with History and Travel, from Oak Knoll

Catalogue 253 in the long-running series from Oak Knoll Books recently arrived. Oak Knoll specializes in "books about books" and bibliography, but there is a sizable number of unexpected works inside for one of Oak Knoll's numbered catalogues. They have many 18th and 19th century American travel books, first or other early editions. In fact, there are many more antiquarian books here than in the usual Oak Knoll catalogue. So, we will take a look at a few of these in particular, with the note that you will also find plenty of the typical Oak Knoll books, such as limited editions from fine presses, available as well.

Item 71 is a fascinating travelogue from a revolutionary Frenchman who came to America in 1788. Jacques Pierre Brissot de Warville was handed the keys to the Bastille prison after its storming, and went on to be a leading diplomat and creator of foreign policy during the first years of the French Revolution. He came away from his visits to America impressed, a strong supporter of the freedoms the new nation offered. The only major downside was slavery, but Brissot was an optimist. He saw the slave trade being eliminated in many states, a time limit installed for all states, freedom established in some, and believed dissatisfied slaves in the South could escape to the backcountry or Spanish Florida, which would force their masters to treat them well so they would stay. Meanwhile, repulsion by a large percent of the population would make the institution marginal. If only it had been so easy as Brissot imagined. And, if only the French Revolution had gone so well too. Eventually, the freedom-defending Brissot would be caught in the excesses of the Revolution, and like so many others, he was sent to the guillotine in 1793. His book is New Travels in the United States of America. Performed in 1788 (this is the first Irish edition from 1792). Priced at $400.

Herman Melville is better known as a novelist than poet, but here is his first book of poems: Battle-Pieces and Aspects of the War. During the latter part of his life, Melville turned to writing poetry. He was not particularly successful during his lifetime as a novelist, less so as a poet. However, the prestige of his novels grew in time, though his poetry is still awaiting recognition. This collection of poetry was published after the Civil War, and Melville makes his sympathies known in his dedication, to "the memory of the Three Hundred Thousand who in the War for the Maintenance of the Union fell devotedly under the Flag of their Fathers." Item 199. $600.

Item 213 is a travelogue for Colorado during its first gold rush -- Rambles in the Rocky Mountains: with a Visit to the Gold Fields of Colorado. This book was published in 1864, six years after the discovery of gold, but two decades before production really took off. Author Maurice Morris was a former Postmaster-General of Jamaica, who managed to find his way to Colorado despite the Civil War, and wrote of his experiences for his countrymen back in England. $275.