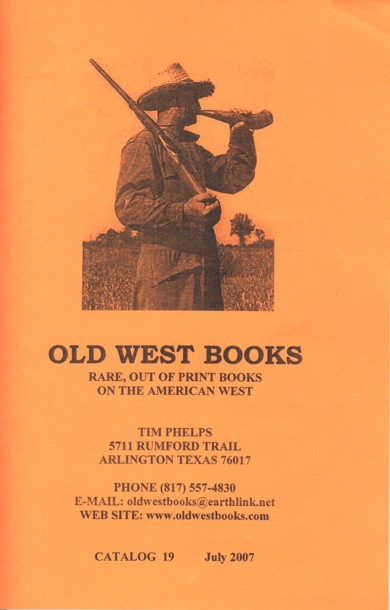 Old West Books has published their Catalog 19 of rare and out of print books on the American West. Collectors of the West will not be disappointed. There are over 300 books, including many first and early editions from the 19th century, along with more recent titles and reprints from the past century. Many of these books are obscure or quite hard to find. We can only describe a few as samples, but anyone trying to fill holes in a western collection should have this catalogue. It almost certainly has some missing pieces of your collecting puzzle. The catalogue is particularly strong in travel histories by some of the less well-known settlers who traversed the Oregon and other trails, along with stories of gunmen and other outlaws, and histories of that most iconic and ironic western figure, General George Armstrong Custer.

Here is one of the few Custer biographies that leaves out that last, unpleasant incident for which he is best remembered. The reason it is ignored is this biography was written by Custer himself -- My Life on the Plains or Personal Experiences With Indians. Just as well he left out his last personal experience with Indians. Custer may not have been one of the greatest military leaders, but he was one of the best at self-promotion. That served to provide a higher starting point from which his reputation would fall. In this edition, published in 1876, the year of his demise (it was originally published in 1874), Custer recounts his earlier campaigns against the Indians, in what many believe is a bit of an exaggerated though entertaining style. Item 16. Priced at $675.

Joseph I.C. Clark was a newsman for the old New York Herald. Near the end of his career, he wrote My Life and Memories, published in 1925. He interviewed many people along the way, including Custer in 1876, shortly before he left New York for his final Indian campaign. Three pages in this book cover that interview. There are also recollections of other interviews, including of explorer Henry Stanley and inventor Thomas Edison. Item 12. $100.

Jacob Horner was an unlucky man. He enlisted to fight the Indians, but he had no horse. He had to walk 318 miles to reach the Montana Territory. Then, when the 7th Cavalry mounted to accompany Custer to the Little Big Horn, Horner was still without a horse. He had to stay home while the others went off to battle. Well…maybe Horner wasn't such as unlucky man after all. He was unlucky in that he that he never got to see his friends again, but Jacob Horner did get to outlive Custer by 75 years. Item 10 is a 1942 biography of him by Usher Burdick and Eugene Hart: Jacob Horner and the Indian Campaigns of 1876 and 1877. $150.