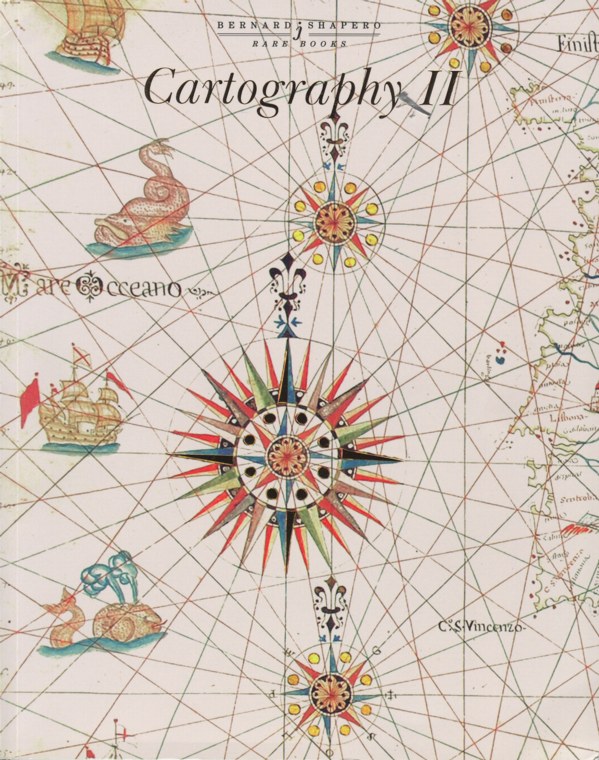 Bernard J. Shapero Rare Books has issued its second catalogue of fifty magnificent atlases and maps, Cartography II. The first was issued in Spring of 2006, and as fantastic as that one was, this gives no quarters. It contains many of the finest antiquarian atlases to be found anywhere. Then again, you would not expect anything but the best when a catalogue contains 130 pages of richly illustrated descriptions for just 50 items. Naturally, this catalogue will not be suitable for average collectors, but for those who collect at the level of extraordinary, it is a must. Here are a few of these antique atlases and collections of maps.

Item 30 is a 1486 printing of Ptolemy's Cosmographia. This is the second edition of the Ulm printing, first published in 1482. It was the first atlas printed outside of Italy and the first to be illustrated with woodcut maps. This edition also features the deep blue hand coloring noted of the 1482 printing. It includes the first cartographical representations of Greenland and Iceland, and contains the first datable printed maps signed by the mapmaker. Price on request.

Perhaps the next most desirable of the Ptolemaic atlases are those created by Martin Waldseemuller. Waldsemuller is most notable for producing the first map to label the New World "America." The name stuck. There is but one known copy of that 1507 map, held by the Library of Congress. Item 31 is Johann Schott's 1520 rendition of Cosmographia, based on Waldseemuller's work and the Ulm Ptolemy. It includes the map of the Americas, not quite as we know it today, but still recognizable. £250,000 (British pounds, or approximately $492,050 in US dollars).

Here is an atlas not meant for the financially faint-hearted. It is a set of Joan Blaeu's "Great Atlas," which Shapero describes as the "most expensive book published in the seventeenth century." This is a 1667 edition in French (published in Amsterdam) of Le Grand Atlas ou Cosmographie Blauiane... It consists of twelve volumes, containing 596 maps. The maps were contemporarily hand colored. The French edition contains the same maps as the Latin version, but more text on France. America is represented by 25 maps. Item 5. Price on request.

Item 7 is a Blaeu townbook, though one published after his lifetime by Christoffel Alberts. It is the 1724 Nouveau Theatre d'Italie, a townbook for Italy. It includes 282 maps, plans, views and portraits of Italy, including buildings and statues as well as town plans and bird's-eye views. Alberts began publishing these books based on Blaeu's earlier work in 1724. £80,000 (US $157,500).