Law and Legal History from the Lawbook Exchange 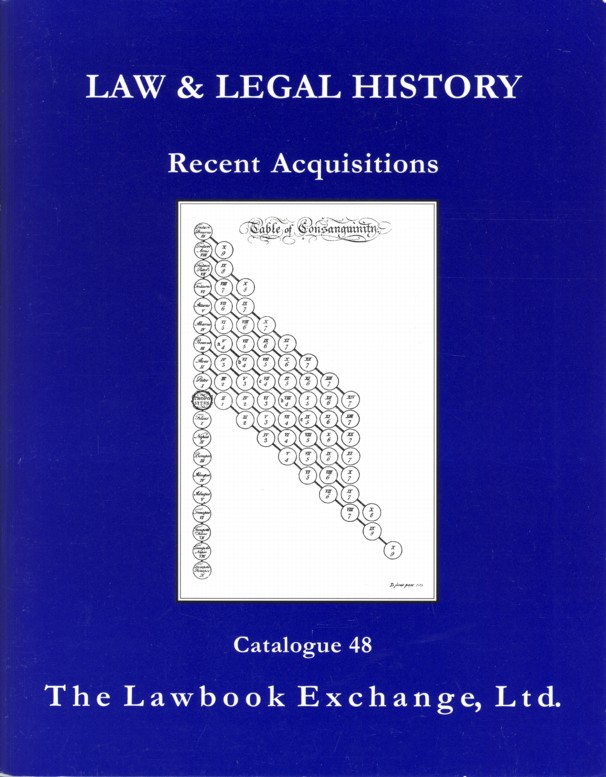 Law and Legal History from the Lawbook Exchange

The Lawbook Exchange has issued its Catalogue 48 of Recent Acquisitions. The Lawbook Exchange mixes scholarly legal treatises with law-related works more accessible to the general public. Whether looking for useful information for a legal practice, or building a collection related to the law or interesting/entertaining legal cases, you will find valuable material in this catalogue. Along with the many antiquarian works offered, the Lawbook Exchange also provides current works of legal scholarship. Here are a few of the new acquisitions now available.

Item 38 includes the first official printings of some of the most hated of all laws ever passed in America, the Alien and Sedition Acts. These acts enabled the government to stifle free speech and deport aliens it did not care for. They ended up doing more to turn the people against the Federalists who controlled the government than to quiet opposition. President Adams would be swept from office in 1800 and the Federalists would never hold national office again, completely disappearing two decades later. Offered is Volume 4 of The Laws of the United States of America. In Four Volumes. This volume, which contains other laws, including a 1798 treaty with the Cherokee Indians, was a continuation of a three-volume set completed in 1796. $200.

For those more interested in scandal than scholarship, item 40 includes 1719 editions of The Case of Impotency, by George Abbot, and The Tryal of Mervin Lord Audley...For A Rape and Sodomy, probably written by Edmund Curll. Curll specialized in pornography covered by a veneer of law or theology to make it appear respectable. The former recounted a trial in which "Lady" Essex claimed her husband was impotent as a reason for divorce. The claim was false and used to cover an affair she was having with the Earl of Somerset. The trial included an explicit discussion of the Earl and Lady's genitalia, definitely an extra-legal topic. The more graphic second volume describes the trial of a nobleman engaged in bisexual relations with his servants. He was said to have ordered his servants to rape his wife, at times assisting by holding her down. The Lawbook Exchange describes this as a "highly embellished account." And you thought all books about the law were dry! $1,500.