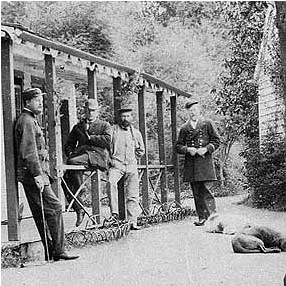 
Item 13 is The Challenge to Liberty, a 1934 book by then former President Herbert Hoover, and inscribed by him. Not too many people were listening to Hoover by that time, his lopsided defeat as a result of the Great Depression only recently past. Hoover worried over the loss of liberty resulting from government actions, and Roosevelt was introducing many government programs to try to alleviate the Depression's effects. Hoover's concerns were not without merit; they apply perhaps even more today. Nonetheless, he may have missed the point that people living in soup lines really have no practical freedom. They weren't going anywhere though technically free. $350.

For political balance, item 27 is a book about another former president, though one from the opposite side of the aisle. Mr. Citizen is Harry Truman's 1960 account of his post-White House life. Truman signed this copy. $400.

Item 29 is the Collection of Official Documents on the San Juan Imbroglio, 1859-1872. This "imbroglio" is better known as the Pig War. All wars should be so violent. The Oregon Treaty of 1846 finally settled the boundary between the U.S. and British Canada, generally being the 49th parallel, but then through the channel that separates Vancouver Island from the mainland. The problem was that it was not clear to which side of the San Juan Islands this line fell. The British Hudson's Bay Company occupied part of these islands, but so did American settlers. They all lived together famously until one day when a British pig began rooting in an American's garden. The American shot the pig, and the dispute between farmer and pig owner escalated into an international incident over who owned the islands. Each side stationed troops on the islands, but fortunately, no shots were fired beyond the one which killed the pig. After many years of this silliness, the dispute was sent to Kaiser Wilhelm of Germany for arbitration, and the Kaiser's commission decided for the U.S. This stapled collection of documents was prepared in about fifty copies for a group led by Washington Senator Henry Jackson in the early 1960s when a park was being established at the site. $200.