The Pacific Northwest from Wessel and Lieberman 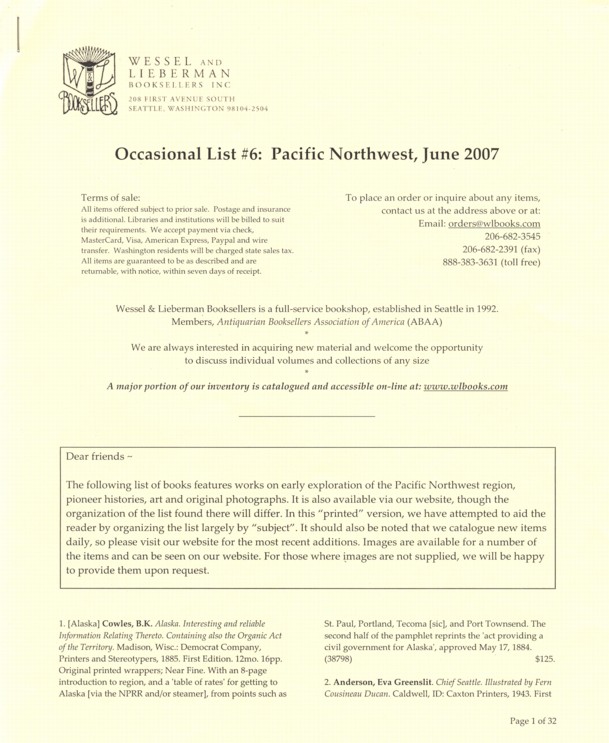 The Pacific Northwest from Wessel and Lieberman

From Wessel and Lieberman of Seattle comes their latest offering, Occasional List #6: Pacific Northwest, June 2007. This catalogue includes over 300 items pertaining to the Pacific Northwest, primarily Oregon, Washington, and British Columbia. These are overwhelmingly inexpensive items, ranging from works published a century and a half ago to recent times. While a few items make their way into four digits, I can't remember when I last saw a catalogue with so many $5 books. Those ones may not be highly collectible, but offer some interesting reads. This is a great catalogue for those who either collect or just love the Northwest, which must include anyone who has ever been to this scenic territory. Now for a few samples of what Wessel and Lieberman are offering.

We start with a book that is both very old and only moderately so. Here is the explanation. Heinrich Zimmermann served on Captain Cook's third and last voyage. After the travelers returned to England in 1780 (without Cook, who was killed by natives in Hawaii), it took several years for the official account to be published. However, a few seamen rushed their own accounts out in advance, and Zimmermann was one of the quickest of these unauthorized historians. His account, which includes some of the earliest material on Hawaii as well as the death of Cook, was published in Zimmermann's native Germany in 1781. French and Dutch editions followed, but this, the first English edition, did not finally make it into print until 1926. Item 104 is a first English edition of Zimmermann's Account of the Third Voyage of Captain Cook, 1776-1780. Translated by Miss U. Tewsley... Priced at $200.

If you were heading to Portland a century ago, The Hotel Portland was the place to stay. Item 242 is a circa 1898 64-page promotional brochure for the hotel, with lots of photographs and descriptions of its amenities, plus views of notable spots in Portland. The Hotel Portland had a nice run, but age caught up with it by the middle of the next century. It was closed in 1950 and demolished the following year. $85.

The Oregon Territory...by Rev. Charles G. Nicolay is a description of the land and its inhabitants that came along at a most opportune time. The book was published in 1846, just as thousands of Americans were about to begin the long trek to this new land. This would not have pleased the English author, who was a supporter of British claims to the territory (the boundary was not resolved until after this book was written) and believed the southern border of British Canada should be the California border. Item 157. $250.

Here is a narrative from one of those people who traveled the Oregon Trail in 1846 -- Magic River Deschutes. This book should be collected just for the author's name if for no other reason: Octavius Pringle. Pringle was just 14 when he journeyed with a group led by his father, Virgil Pringle. This scarce booklet of his reminiscences was published around 1930. Item 217. $45.