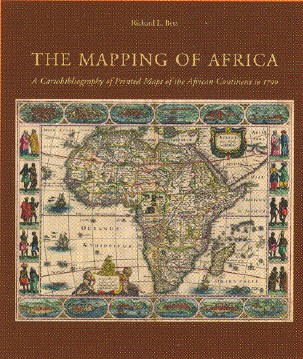 We have just received a catalogue of Africa Travels, the latest from Trophy Room Books of Ellen and Jim Herring. It is one of the most extensive catalogues in this field we have seen, particularly from an American bookseller. While a few of these journeys took place in the 18th and 20th centuries, most describe 19th century travels, the height of African exploration. The catalogue includes a mix of books published contemporarily with the explorations and revisits of those trips published many years later. Here is a chance to see Africa as it was seen from western eyes when Europeans and Americans were first "discovering" this mysterious and largely unknown continent. Here are a few of the works Trophy Room Books is currently offering.

Item 117 is a scarce first edition of Richard Renshaw's travel account, Voyages to the Cape of Good Hope and up the Red Sea with Travels in Egypt through the Deserts in the course of the last War. This is one of the earlier looks at these distant ends of the continent, Renshaw's journey having commenced on February 28, 1796. Renshaw was a good observer of what he saw, which was new to most of the world outside. Published in 1804. Priced at $1,250.

Item 214 is a good account of the harrowing experiences of sea travelers in the early 19th century. The book is Narrative of the Shipwreck of the Sophia on the 30th of May 1819 on the western coast of Africa...by Charles Cochelet. Sea travel in the area was most dangerous at the time, currents wrecking many of the ships that attempted to travel along the coast. When ships were wrecked, the crew would find themselves stranded on a desert coast, with the only hope for survival the assistance of less than friendly natives. Cochelet recounts the exploits of the crew in captivity, the fears and eventually the friends they made. $200.

Another example of the dangers of being shipwrecked off the African coast is told in Voyages to the Coast of Africa, by Messrs Saugnier and Brisson. They were Frenchmen shipwrecked off the coast of Senegal and placed in slavery by local Arabs. This first edition of a very rare book includes a complete map of Africa. Published in 1792. $3,750.

Narrative of a Journey Through Abyssinia in 1862-3, published in 1867, is one of the early travels through this area. Author Henry Dufton journeyed from Khartoum in Sudan to Abyssinia (today's Ethiopia). Dufton was not a true explorer, but more of an ordinary citizen out for an adventure, which he recounts in his book. He was most impressed by the scenery, though not as much by the people, at least at first, though he later came to better understand their customs. Item 2525. $1,250.