&quot;Beat&quot; and Other Poetry, Literature, and Ephemera from Brian Cassidy 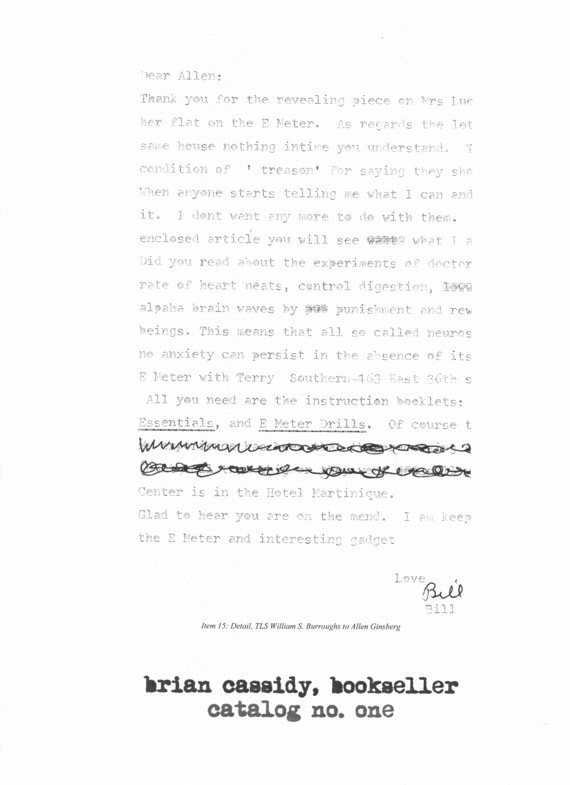 &quot;Beat&quot; and Other Poetry, Literature, and Ephemera from Brian Cassidy

Brian Cassidy, Bookseller has issued his catalog no. one: literature -- rare books, manuscripts, journals and ephemera. That is technically correct, though the greatest focus is on poets from the second half of the 20th century. Those who collect the "beat" generation and its contemporaries in particular will be pleased with this catalogue. However, only a few of the items are actually poetry. There are many associated ephemeral items for the poets, such as letters, drawings, and programs. Additionally, there are pieces associated with prose writers, including several relating to John Steinbeck.

Item 15 is the major piece in this collection, a March 3, 1969 letter and typescript (and envelope) from William Burroughs to Allen Ginsberg. Burroughs and Ginsberg had been friends for 25 years at this point, and, Cassidy notes, "occasional lover[s]" (details unnecessary). The letter, sent from London, is addressed to Allen Ginsberg, "Esq.," probably a humorous reference to Ginsberg's role as amateur legal advisor to friends in trouble with the law. Burroughs refers to Ginsberg's recent auto accident with a "Glad to hear you're on the mend." The typescript, which became On the E Meter, was published by Allen De Loach's Intrepid. The E-meter is some sort of electronic device, similar to a lie detector. It is used by the Church of Scientology to supposedly decipher much more about a person's mental state, even past lives, and effect cures for various mental and physical illnesses. However, it carries a major disclaimer to any effectiveness whatsoever as a result of a government action on false practice of medicine in the 1960s. Burroughs had been a supporter of Scientology, and while thinking the E-meter was useful at the time, he was rapidly becoming disillusioned with the Church and its founder, L. Ron Hubbard. Priced at $25,000.

Item 23 is a letter from novelist Jerzy Kosinski to a book reviewer for the Omaha World Herald. Dated 1971, and on the stationary of the Yale Drama School, he profusely thanks the writer for his review of Being There. Being There is Kosinski's best-known work, having been made into the classic 1979 film starring Peter Sellers as the dimwitted gardener people believed to be an insightful genius. Writes Kosinski, "I can think of nothing more stimulating for an author than to have his vision so exactly seized upon and so lucidly presented to a wide audience. Yet, your critical analysis not only lends a new image to the novel; it prompts the novelist to discern what, without your perception, he never would have believed himself." Cassidy notes that with Kosinski's reputation, this may have been somewhat tongue in cheek, and he may have written similarly exaggerated comments to many other reviewers. $325.