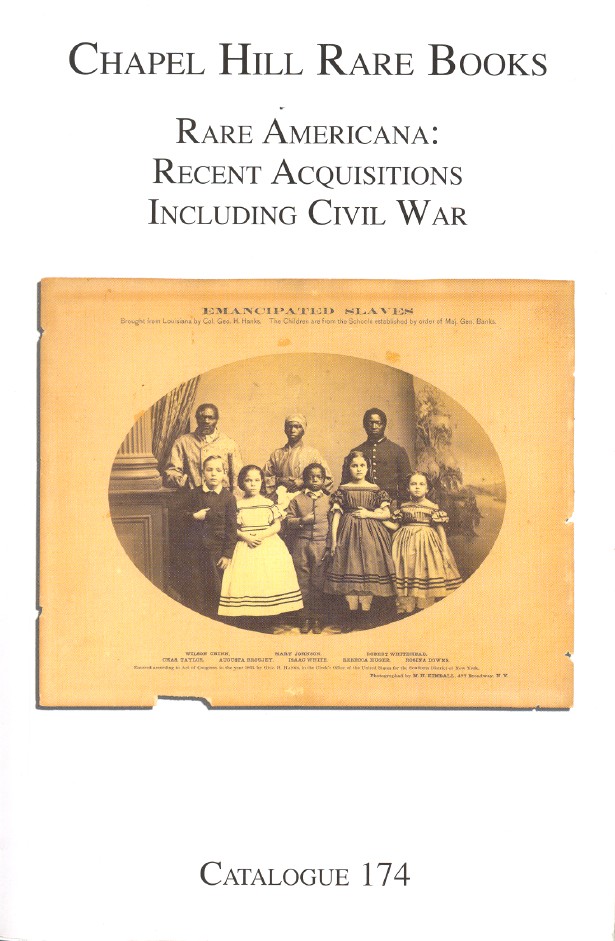 From Chapel Hill Rare Books comes their 174th catalogue: Rare Americana: Recent Acquisitions Including Civil War. Items range from colonial times to the twentieth century, with the bulk fitting in the period from the Revolution through the Civil War. Many are extremely rare, and all are interesting for the windows they provide on their times. While a few items of fiction are included, the great majority are at least truthful in the eyes of the authors who wrote them. Now for a few samples of the over 200 books, broadsides, manuscripts, maps and photographs offered within.

Following the old maxim that a picture is worth a thousand words, we start with item 203, a mounted photograph of freed slaves from Louisiana taken in 1863 (click the image of the catalogue cover to the left to enlarge). These pictures were sold to raise funds for the education of emancipated slaves. However, a quick look at this photograph reveals that it was designed to tell people more than they probably realized. Several of the children appear to be white. Of course, parentage issues quickly become clear. In one case, the child is described as having a mother who was a "bright mulatto," along with a father who was fighting in the "rebel army" (which identifies his race). One can only guess that this photograph was intended to have a particularly strong impact on northerners who would have identified more easily with the plight of these children who looked so much like their own. Priced at $6,850.

Item 14 is a card photograph of a most remarkable pair of conjoined twins, Millie Christine McKoy (they frequently went by this singular name without an "and"). Born into slavery in 1851, they were sold off to be exhibited. For a while, they appeared with P.T. Barnum, but were eventually taken back by the man who financed their original purchase, a Joseph Smith. Smith reunited them with their family on a North Carolina plantation, while his wife undertook their education. Smith died in 1860, and with emancipation, Millie Christine decided to go on tour. They proved to be far more than a standard "freak" show. They were very talented, speaking several languages, singing duets, playing the piano, and even dancing in an extraordinarily graceful manner (though always back to back). They were so successful that they were able to buy the plantation on which they were born, support their family and that of Joseph Smith, which had fallen on hard times. The twins died in 1912, at the age of 61. Their picture can be seen on page 2 of this review. $375.

Item 150 is a letter that ties together two of America's early leaders. Circa 1815, Secretary of State James Monroe writes the U.S. Minister to Britain John Quincy Adams. Monroe would be elected president the following year, Adams nine years later. In it, Monroe informs Adams that Colonel William Drayton of South Carolina will be visiting England, and requests Adams "extend to him your good offices." Drayton was a highly respected veteran of the War of 1812 that Andrew Jackson unsuccessfully later urged Monroe to appoint Secretary of War. Jackson would make Drayton that offer when he became President, but Drayton declined.