New Acquisitions in Americana from the William Reese Co. 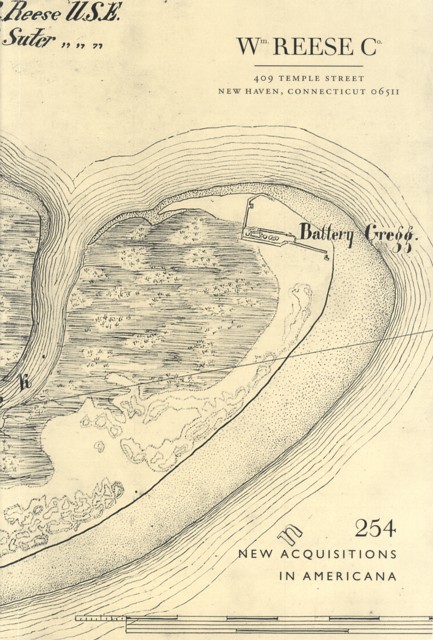 New Acquisitions in Americana from the William Reese Co.

The William Reese Company has issued a catalogue of New Acquisitions in Americana, and they have come up with 200+ interesting and significant items for collectors in the field. The overwhelming majority of works range from Colonial times through the 19th century, but an occasional more recent item slips in, like the Senate report on the Watergate hearings. Reese's business extends into other areas, as we saw last month with their catalogue of literary works, but Americana, and the most important books within that field, are their specialty. No one who follows Reese will be disappointed with catalogue 254. Here are some examples of what can be found inside.

Item 21 is a book that was both a great success and great failure. Photographer Mathew Brady, along with writer Charles Lester, put together a photo-biography of a dozen of America's leading citizens in the earliest days of photography. The publication date was 1850, and it preserved the likenesses of these important people, some of whom did not survive the year. The book is The Gallery of Illustrious Americans... and among those whose images were preserved were Presidents Zachary Taylor and Millard Fillmore, the three great senate orators from the first half of the 19th century -- Daniel Webster, Henry Clay, and John C. Calhoun, explorer John C. Fremont, Generals Winfield Scott and Lewis Cass, and birdman John James Audubon. Not as well remembered today are Democratic political leader and New York Senator and Governor Silas Wright, writer-historian William Hickling Prescott, and Unitarian theologian William Ellery Channing. Both Taylor and Calhoun died shortly before publication of the book, while Channing and Wright's photos must have been old ones as they died in 1842 and 1847 respectively. The book was successful in that it preserved these leaders images for all time. However, it was not a financial success, and certainly did not achieve its stated aim, "that it may...bind the Union still more firmly together." Priced at $22,500.

Item 5 is a novel exploring issues of race, class, and gender during Reconstruction that you have never read. The reason we are confident you haven't read it is the book was never published. The title is Savannah or the Form of a Servant, written circa 1875, by an unknown author, most likely a woman. It is a 324-page, 80,000-word manuscript work, described by Reese as "a fascinating and well-written unpublished American manuscript novel...addressing some of the leading issues of the Reconstruction era, including the status of Blacks and their role in society." The protagonist is a young lady with the very Dutch name Hannah Ten Eyck, who travels to Florida and comes in contact with recently freed slaves. This changes her attitudes, and she moves to Tennessee to become a teacher of black students, eventually discovering she has black ancestors on her mother's side. She ends up changing her name to "Savannah" and identifying with the black community. Reese describes the author as "a skillful writer," and notes, "the unpublished text presents an excellent opportunity for the scholarly study and publication of an intriguing Reconstruction-era novel." $25,000.